Insect-eating birds that feed on the wing—from nighthawks and nightjars to kingbirds and pewees—are vanishing from parts of North America, and scientists don't know why 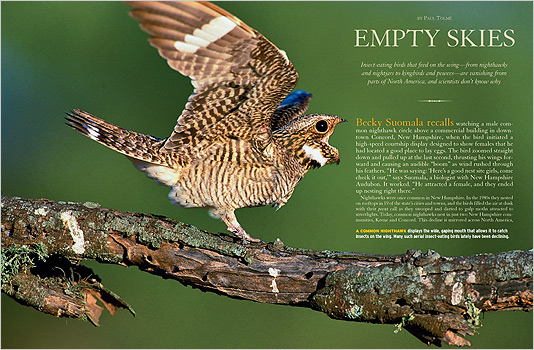 BECKY SUOMALA recalls watching a male common nighthawk circle above a commercial building in downtown Concord, New Hampshire, when the bird initiated a high-speed courtship display designed to show females that he had located a good place to lay eggs. The bird zoomed straight down and pulled up at the last second, thrusting his wings forward and causing an audible “boom” as wind rushed through his feathers. “He was saying: ‘Here’s a good nest site girls, come check it out,’” says Suomala, a biologist with New Hampshire Audubon. It worked. “He attracted a female, and they ended up nesting right there.”

Nighthawks were once common in New Hampshire. In the 1980s they nested on rooftops in 19 of the state’s cities and towns, and the birds filled the air at dusk with their peent call as they swooped and darted to gulp moths attracted to streetlights. Today, common nighthawks nest in just two New Hampshire communities, Keene and Concord. This decline is mirrored across North America, where the bird’s numbers have shrunk by half in the past 40 years. “We really don’t know why they are disappearing,” Suomala says.

Common nighthawks are aerial insectivores, a guild of birds that feed on flying insects. Members include nightjars, swallows, swifts, martins and flycatchers. They are winged acrobats that twist and turn like miniature jet fighters to snatch prey—moths, dragonflies, bees, butterflies, flies and flying beetles—out of the sky. Unfortunately, this aerial showmanship is becoming rarer.

“The proverbial clock may well be ticking down on many common species of aerial insectivores in Canada,” Jon McCracken wrote in the winter 2008 issue of BirdWatch Canada. The Ontario program manager for Bird Studies Canada was among the first to note this “alarming” decline, which he and colleagues discovered in 2004 while compiling the second Atlas of Breeding Birds of Ontario. Whip-poor-will data jumped out. “We said, ‘Holy cow, whip-poor-wills are blinking out everywhere,’” McCracken says. 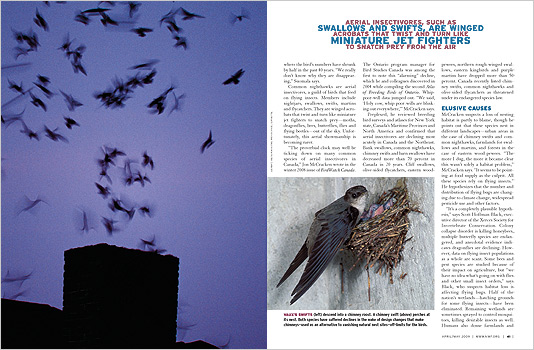 Elusive Causes
McCracken suspects a loss of nesting habitat is partly to blame, though he points out that these species nest in different landscapes—urban areas in the case of chimney swifts and common nighthawks, farmlands for swallows and martins, and forests in the case of eastern wood-pewees. “The more I dug, the more it became clear this wasn’t solely a habitat problem,” McCracken says. “It seems to be pointing at food supply as the culprit. All these species rely on flying insects.” He hypothesizes that the number and distribution of flying bugs are changing due to climate change, widespread pesticide use and other factors.

“It’s a completely plausible hypothesis,” says Scott Hoffman Black, executive director of the Xerces Society for Invertebrate Conservation. Colony collapse disorder is killing honeybees, multiple butterfly species are endangered, and anecdotal evidence indicates dragonflies are declining. However, data on flying insect populations as a whole are scant. Some bees and pest species are studied because of their impact on agriculture, but “we have no idea what’s going on with flies and other small insect orders,” says Black, who suspects habitat loss is affecting flying bugs. Half of the nation’s wetlands—hatching grounds for some flying insects—have been eliminated. Remaining wetlands are sometimes sprayed to control mosquitoes, killing desirable insects as well. Humans also douse farmlands and lawns with insecticides or pesticides. 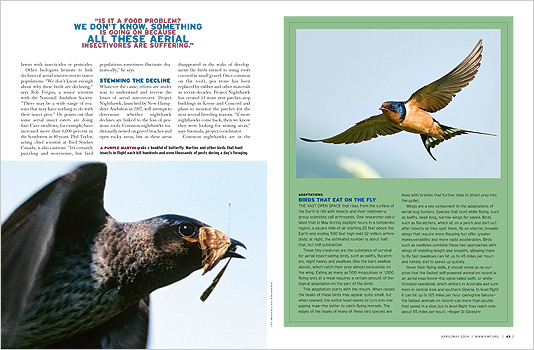 Other biologists hesitate to link declines of aerial insectivores to insect populations. “We don’t know enough about why these birds are declining,” says Rob Fergus, a senior scientist with the National Audubon Society. “There may be a wide range of reasons that may have nothing to do with their insect prey.” He points out that some aerial insect eaters are doing fine: Cave swallows, for example, have increased more than 6,000 percent in the Southwest in 40 years. Phil Taylor, acting chief scientist at Bird Studies Canada, is also cautious. “It’s certainly puzzling and worrisome, but bird populations sometimes fluctuate dramatically,” he says.

Stemming the Decline
Whatever the cause, efforts are under way to understand and reverse the losses of aerial insectivores. Project Nighthawk, launched by New Hampshire Audubon in 2007, will attempt to determine whether nighthawk declines are linked to the loss of pea-stone roofs. Common nighthawks traditionally nested on gravel beaches and open rocky areas, but as these areas disappeared in the wake of development the birds turned to using roofs covered in small gravel. Once common on flat roofs, pea stone has been replaced by rubber and other materials in recent decades. Project Nighthawk has created 13 stone nest patches atop buildings in Keene and Concord and plans to monitor the patches for the next several breeding seasons. “If more nighthawks come back, then we know they were looking for nesting areas,” says Suomala, project coordinator.

Common nighthawks are in the same family as nightjars—Caprimulgidae—which translates as “goatsuckers.” Some biologists speculate that the bizarre name derives from the birds’ affinity for farmlands, though nightjars suck no goats. They do ‘jar the night’ with their calls, however. Whip-poor-wills are the best-known nightjars, nocturnal feeders best found by listening for their whip-poor-WILL call.

Whip-poor-wills feed by launching from the ground to snatch bugs, rather than by hunting on the wing as nighthawks do. They have declined 57 percent since the 1960s, and some biologists speculate that urban light pollution could be decimating the moth populations the birds rely on. “Is it a food problem?” asks biologist Pamela Hunt, chair of the Nightjar Working Group. “We don’t know. Something is going on because all these aerial insectivores are suffering.” 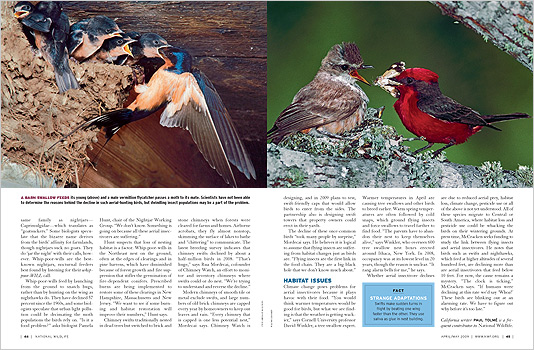 Hunt suspects that loss of nesting habitat is a factor. Whip-poor-wills in the Northeast nest on the ground, often at the edges of clearings and in pine barrens, which have diminished because of forest growth and fire suppression that stifles the germination of fire-dependent conifers. Prescribed burns are being implemented to restore some of these clearings in New Hampshire, Massachusetts and New Jersey. “We want to see if some burning and habitat restoration will improve their numbers,” Hunt says.

Chimney swifts traditionally nested in dead trees but switched to brick and stone chimneys when forests were cleared for farms and homes. Airborne acrobats, they fly almost nonstop, skimming the surface of lakes to bathe and “chittering” to communicate. The latest breeding survey indicates that chimney swifts declined by about a half-million birds in 2008. “That’s huge,” says Rua Mordecai, cofounder of Chimney Watch, an effort to monitor and inventory chimneys where swifts could or do nest. “We’re trying to understand and reverse the decline.”

Modern chimneys of smooth tile or metal exclude swifts, and large numbers of old brick chimneys are capped every year by homeowners to keep out leaves and rain. “Every chimney that is capped is one less potential nest,” Mordecai says. Chimney Watch is designing, and in 2009 plans to test, swift-friendly caps that would allow birds to enter from the sides. The partnership also is designing swift towers that property owners could erect in their yards.

The decline of these once-common birds “took many people by surprise,” Mordecai says. He believes it is logical to assume that flying insects are suffering from habitat changes just as birds are. “Flying insects are the first link in the food chain. They are a big black hole that we don’t know much about.”

Habitat Issues
Climate change poses problems for aerial insectivores because it plays havoc with their food. “You would think warmer temperatures would be good for birds, but what we are finding is that the weather is getting wackier,” says Cornell University professor David Winkler, a tree swallow expert. Warmer temperatures in April are causing tree swallows and other birds to breed earlier. Warm spring temperatures are often followed by cold snaps, which ground flying insects and force swallows to travel farther to find food. “The parents have to abandon their nest to keep themselves alive,” says Winkler, who oversees 600 tree swallow nest boxes erected around Ithaca, New York. In 2008, occupancy was at its lowest level in 20 years, though the reason is unclear. “It rang alarm bells for me,” he says.

Whether aerial insectivore declines are due to reduced aerial prey, habitat loss, climate change, pesticide use or all of the above is not yet understood. All of these species migrate to Central or South America, where habitat loss and pesticide use could be whacking the birds on their wintering grounds. At press time, McCracken seeks funding to study the link between flying insects and aerial insectivores. He notes that birds such as swifts and nighthawks, which feed at higher altitudes of several hundred feet, are declining more than are aerial insectivores that feed below 10 feet. For now, the cause remains a mystery. “The clock is ticking,” McCracken says. “If humans were declining at this rate we’d say ‘Whoa!’ These birds are blinking out at an alarming rate. We have to figure out why before it’s too late.”


Adaptations: Birds That Eat on the Fly
The vast open space that rises from the surface of the Earth is rife with insects and their relatives—a group scientists call arthropods. One researcher calculated that in May during daylight hours in a temperate region, a square mile of air starting 20 feet above the Earth and ending 500 feet high held 32 million arthropods; at night, the estimated number is about half that, but still substantial.

These tiny creatures are the substance of survival for aerial insect-eating birds, such as swifts, flycatchers, night hawks and swallows, which catch their prey almost exclusively on the wing. Eating as many as 500 mosquitoes or 1,000 flying ants at a meal requires a certain amount of biological adaptation on the part of the birds.

This adaptation starts with the mouth. When closed the beaks of these birds may appear quite small, but when opened, the entire head seems to turn into one gaping maw—the better to catch flying morsels. The edges of the beaks of many of these bird species are lined with bristles that further help to direct prey into the gullet.

Wings are a key component in the adaptations of aerial bug hunters. Species that hunt while flying, such as swifts, need long, narrow wings for speed. Birds such as flycatchers, which sit on a perch and dart out after insects as they spot them, fly on shorter, broader wings that require more flapping but offer greater maneuverability and more rapid acceleration. Birds such as swallows combine these two approaches with wings of middling length and breadth, allowing them to fly fast (swallows can hit up to 45 miles per hour) and nimbly and to speed up quickly.

Given their flying skills, it should come as no surprise that the fastest self-powered animal on record is an aerial insectivore—the spine-tailed swift, or white-throated needletail, which winters in Australia and summers in central Asia and southern Siberia. In level flight it can hit up to 105 miles per hour (peregrine falcons—the fastest animals on record—can more than double that speed in a dive, but in level flight they reach only about 55 miles per hour).—Roger Di Silvestro