Through the Mayors' Monarch Pledge, the National Wildlife Federation seeks to share best practices and lessons learned for each of the 25 potential actions that mayors can take for the monarch butterfly. This page includes links to model polices and case studies of what mayors are doing for monarchs. Please also check out the “open” Facebook Group for real time sharing about the pledge. You can submit a best practice by posting to the Facebook Group or by emailing mayorsmonarchpledge@nwf.org. 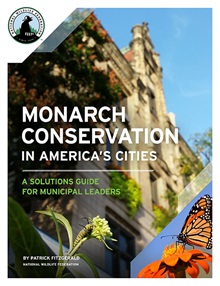 This guide is intended for mayors, local government chief executives, municipal staff and others that want to take action to help save the declining monarch butterfly in their community. This guide provides case studies and shares innovative best practices that can be replicated by municipalities across the nation. It includes model language for proclamations, ordinances and other best practices. By learning from one another and understanding what has worked (and what hasn’t) cities can more effectively and more quickly take action and make a difference for the monarch (and other pollinators too).

WEBINAR: Western Monarchs: How Western Cities Can Help Save the Monarch Butterfly

On January 23, 2020, the National Wildlife Federation hosted a Mayors' Monarch Pledge webinar with a presentation from Stephanie McKnight, a conservation biologist with The Xerces Society. This webinar focused on the significant decline of the western monarch butterfly population (west of the Continental Divide in the United States) and how participants can support monarch butterfly conservation by encouraging cities, towns, and communities of all kinds to take the Mayors’ Monarch Pledge.

On May 23, 2017, the National Wildlife Federation hosted a Mayors’ Monarch Pledge webinar with presentations from LaJuan Tucker, Program Coordinator for Wildlife Austin and Megan Tinsley, Policy Director for the New Jersey Audubon. This webinar focuses on the Systems Change Action items (#18-25), and what actions mayors, municipal leaders and communities across the country have taken to initiate systemic changes such as integrating monarch butterfly conservation into city sustainability plans or changing weed ordinances to allow for the planting of milkweed and other native nectar plants.

On December 12, 2016, the National Wildlife Federation hosted a Mayors' Monarch Pledge webinar with presentations from Chip Taylor, Founder and Director of Monarch Watch, and Mary Phillips, Director of Garden for Wildlife at the National Wildlife Federation. This webinar focuses on steps that mayors, municipal leaders, and communities of all kinds can take to source native milkweeds for spring planting from the Monarch Watch Milkweed Market to local native plant nurseries, garden centers and non-profits that host plant sales like garden clubs and native plant societies.

WEBINAR: Lessons Learned from the First Year of the Mayors' Monarch Pledge

On September 28, 2016, the National Wildlife Federation hosted a Mayors’ Monarch Pledge webinar to present best practices and lessons learned during the first year of the Mayors’ Monarch Pledge which was launched in September 2015. The webinar also share about work underway to create Urban Monarch Networks and City-Wide Monarch Conservation Plans, including a presentation from members of the Oklahoma City Monarch Network. The US Fish and Wildlife Service also presented about the pilot Urban Monarch Landscape Conservation Design project.

Mayors are issuing proclamations to help educate the public about the decline of the monarch butterfly and what citizens can do to take action. Proclamations have been issued on the day mayors take the pledge or other significant national or local days ranging from National Pollinator Week to the date of a local monarch butterfly festival.

Most municipalities have abandoned or vacant lands in their communities. These lands can be temporarily or permanently converted to monarch butterfly habitat. These habitats could be managed to produce milkweed seeds and plants for distribution at native plant sales or other events.

This National Wildlife Federation's blog summarizes the recent actions of Mayor Steven Adler and the City of Austin and includes direct links to the May 2015 proclamation directing the city to plant more milkweed on its 27,000 acres of public lands and 500 municipal buildings.

This blog summarizes many of the initiatives underway in St. Louis, including Mayor Francis Slay’s Milkweed for Monarch program launched in 2014 that is continuing to grow today.

Like many smaller cities and towns, Northville’s noxious weed ordinance had not been updated in many years. Under the town’s old ordinance, dating back to 1962, milkweed was specifically prohibited. Northville passed an amendment to the noxious weed ordinance to adopt the state of Michigan’s listing of noxious and poisonous weeds which does not include milkweed on the noxious plant list. Northville intentionally tied their ordinance to the state guidelines because the state lists are updated on a more regular basis based on the best and most recent science. Cities that might wish to consider this approach should visit the U.S. Plant Database, which includes a helpful list of state noxious plant lists and policies.

Noxious and poisonous weeds means all species identified in the State of Michigan’s noxious weeds, and the restricted noxious weed list available from the Michigan Department of Agriculture and Rural Development, as established under Act 329 of 1965.

Monarch Butterfly 2018 Population Down by 14.8 Percent

On a Monarch Mission