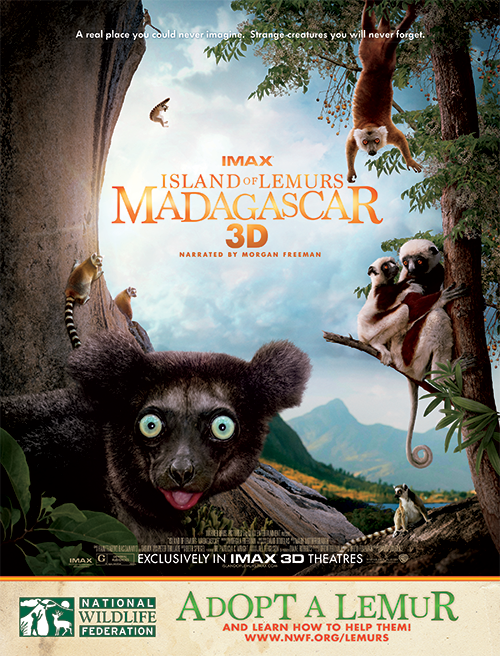 The National Wildlife Federation teamed up with Island of Lemurs: Madagascar as an education partner for the film, providing ways to learn more about lemurs and how to help protect them.

Island of Lemurs: Madagascar is the incredible true story of nature’s greatest explorers—lemurs. Lemurs arrived in Madagascar as castaways millions of years ago and evolved into hundreds of diverse species, but are now highly endangered.

Captured with IMAX 3D cameras and narrated by Morgan Freeman, the film takes audiences on a spectacular journey to the remote and wondrous world of Madagascar, joining trailblazing scientist Dr. Patricia C. Wright on her lifelong mission to help these strange and adorable creatures survive in the modern world.

Directed by David Douglas, and written and produced by Drew Fellman, Island of Lemurs: Madagascar is a presentation of Warner Bros. Pictures and IMAX Entertainment.

Take a look at the official trailer.


Go Behind the Scenes

Hear from the director and scientists that contributed to the creation of this amazing film.

Adopt an Animal: The dry forest habitat that lemurs depend on for survival is rapidly vanishing. As a result of poverty in Madagascar, people are turning to illegal logging and bush meat hunting to make money. These actions have made lemurs the most endangered kind of primate in the world. As a class, club, or family, come together and talk about the problems faced by lemurs and ways to help. Consider symbolically adopting one of these endangered primates through the National Wildlife Federation as one way to help—adoption supports our education and conservation efforts.