Reckless Abandon: How the Bush Administration is Exposing America’s Waters to Harm 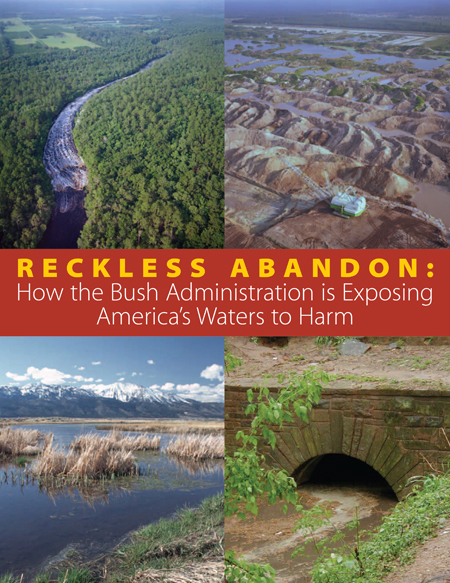 More than thirty years ago, Congress enacted the Clean Water Act to make the nation’s waters safe for fishing and swimming by eliminating water pollution at its source. Yet a new Bush administration policy is now placing many streams, wetlands, and other waters in serious danger of pollution and destruction, threatening not only these waters but also the larger rivers, lakes, and coastal waters into which they flow. This threat comes at a time when water pollution continues to be one of the nation’s most serious environmental problems — and a central environmental concern for most of the public.

On January 15, 2003, the Bush administration announced a new policy directive designed to remove Clean Water Act protections for many streams, wetlands, ponds, lakes, and other waters. The policy — initiated through a joint memorandum issued by the U.S. Environmental Protection Agency (EPA) and the U.S. Army Corps of Engineers (Corps) — effectively directed federal regulators to withhold protection from tens of millions of acres of wetlands, streams, and other waters unless they first get permission from their national headquarters in Washington, DC. The directive made clear that no prior permission is required for EPA and Corps field staff to ignore Clean Water Act protections and allow industrial dischargers, developers, and others to pollute, fill, or destroy these waters.

This report illustrates how federal officials are using the January 2003 policy directive to deny Clean Water Act jurisdiction over waters that had been included in the Clean Water Act’s protective scope for over thirty years. The case studies in the report provide several examples of the Corps declining to enforce federal restrictions against water pollution in lakes, rivers, streams and wetlands across the country, such as a l50-mile-long river in New Mexico, thousands of acres of wetlands in one of Florida’s most important watersheds, headwater streams in Appalachia, playa lakes in the Southwest, a sixty-nine- mile long canal used as a drinking-water supply, and even an eighty-six-acre lake in Wisconsin that is a popular fishing spot. The implementation of the Bush administration’s policy has effectively left all of these waters — and many, many more — without the Clean Water Act to protect them.

As the examples in this report demonstrate, the Bush administration’s policy has given developers and other polluters a green light to ignore the Clean Water Act where it legally applies. The administration must immediately withdraw the January 2003 policy directive and replace it with clear instructions to Corps and EPA staff that they shall enforce existing Clean Water Act limits on water pollution to the full extent of the law. In addition, Congress should act to ensure that the nation’s waters remain protected.

This report demonstrates that the Bush administration’s policy has given developers and other polluters a green light to ignore the Clean Water Act where it legally applies.