America's Flood Risk Is Heating Up 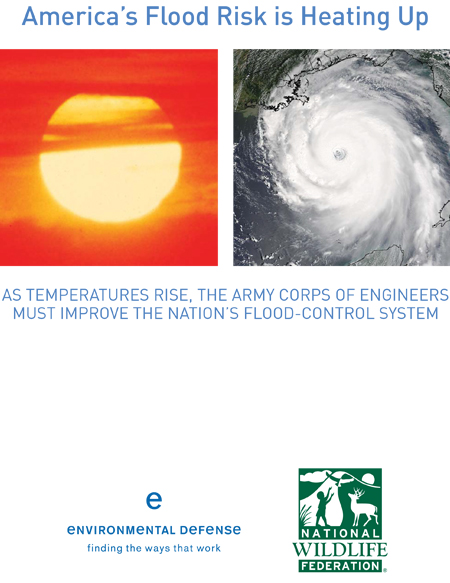 Flood damages have increased three-fold in real dollars since Congress first immersed the federal government in the national effort to build flood-control projects in the 1920s. And that was before Hurricane Katrina.

Global warming now promises to increase the risk of flooding in several ways. Rising ocean temperatures have already increased the intensity of hurricanes and resulting storm surges like those experienced in New Orleans. This not only increases the risk of more severe storms in the Gulf of Mexico and the southern Atlantic coast, which have historically borne the brunt of hurricanes, but also increases the likelihood that major storms will reach further north.

Rising sea levels also raise storm surges. Sea levels along the New York coastline are projected to rise by 10 to nearly 45 inches by 2080, increasing the risk of a 100-year storm to as frequent as once every four years, under one scenario. Sea level has already risen by seven inches since 1900 in California and is projected to increase by an additional 22 to 35 inches by 2100, if emissions continue unabated.

The impacts of climate change can be seen inland as well. Nationwide, changing climates are increasing the amount of heavy rainfall and causing more snow to fall as rain. When snow occurs, it melts earlier in the season. In California, these effects could reduce snowpack by as much as 70 to 90% and increase spring stream-flow by up to 30% by the year 2100 if emissions continue unabated.

Our federal flood-control programs are not prepared to respond to these increased pressures. Ironically, existing flood-control programs can increase flood damages by inadvertently inducing people to build in flood-prone areas. Federal flood-control projects often consist of a so-called 100-year levee. This does not mean the levee will only be overtopped once in 100 years. Rather, such a project has a 1% chance of being overtopped each year—or a 26% chance of overtopping in the life of a 30-year mortgage. Moreover, this risk often increases over time due to lax maintenance or subsidence of the levee itself, causing the structure to provide even less protection. Those who build behind a 100-year levee are not required to elevate their structures, ensure that the structure is able to withstand a flood, or even purchase flood insurance. For these reasons, construction of a 100-year levee often prompts construction of dense suburban development. As we saw in New Orleans, these projects ultimately put people in harm’s way. At the same time, flood-control projects have contributed heavily to the loss of coastal wetlands, which would otherwise provide a natural buffer against storms.

Flood-control projects are undoubtedly needed to bolster hurricane protection, particularly in existing urban areas. These areas, like New Orleans and Sacramento, require bigger or stronger levees. But the system for authorizing and designing projects is overwhelmingly driven by politics. Corps officials, under pressure, repeatedly justify unworthy projects, which displace limited funds needed by more critical projects elsewhere. In the five years preceding Hurricane Katrina, for example, Louisiana received $1.9 billion in federal water project funds, far more than any other state, but devoted only a pittance to bolstering New Orleans’ levees.

The federal flood insurance program itself may encourage new development in flood-prone areas. Virtually everyone who is required to purchase insurance pays the same rate, regardless of degree of risk or flooding history, with variation depending exclusively on building elevation. Flood insurance maps are outdated and inaccurate. Moreover, the mere existence of flood insurance generates a false sense of reliance—and therefore entitlement—among those who are not required to buy flood insurance because they live behind levees or outside the floodplain depicted in an out-dated map. When these properties are flooded, a compassionate nation tends to provide substantial aid. In effect, federal taxpayers have assumed the risk of construction in flood-prone areas.

Hurricane Katrina provided a hint of more to come. The federal government needs to enact major reforms. It needs to change the criteria for flood-control projects to stop encouraging development in areas that are vulnerable to floods and encourage the use of more non-structural flood-damage reduction projects in less developed areas. It needs to establish a system to direct limited funding to the greatest needs. It needs to bolster environmental criteria to stop eroding wetlands. It needs to incorporate the lessons of modern climate science to ensure that development is appropriate and that proper consideration is given to the environment and the ecosystems on which we depend. And it needs to de-politicize the process of designing and evaluating flood-control projects by adopting a system of independent expert review. In addition, the government needs to reform the flood insurance program, making it more actuarially sound by charging rates that reflect actual flood risk, and requiring those located behind levees to purchase insurance if they still face a serious residual risk of flooding.

America's Flood Risk Is Heating Up

As temperatures rise, the Army Corps of Engineers must improve the nation's flood-control system.