Sea-Level Rise and Coastal Habitats in the Pacific Northwest 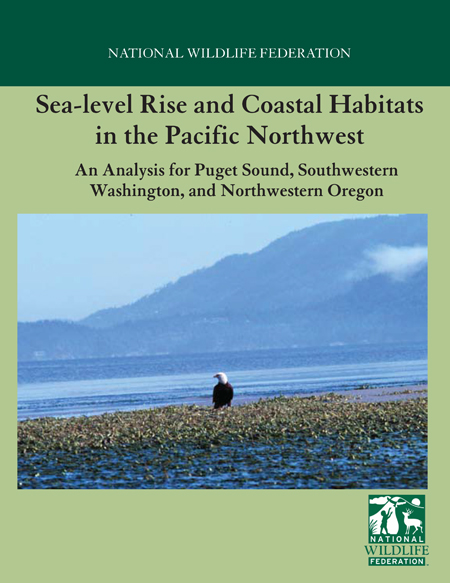 The Pacific Northwest is blessed with an amazing diversity of coastal habitats, from rocky bluffs and sandy beaches along the Pacific Coast to the tidal flats, marshes, mixed sediment beaches, and eelgrass beds of Puget Sound. Together, these habitats support thousands of species of fish and wildlife, and they are a linchpin for the regional economy, culture, and quality of life.

Despite its pristine image, however, the region’s coastal habitats and the ecological systems they support face serious problems due to human activities, which have prompted numerous local and regional restoration and protection efforts. Whether our significant conservation investments will endure for the future depends on how well the region is able to promote more sustainable use of its coastal resources in the face of continued population growth, pressures for development, and now, the very real threat of global warming.

This study investigates the potential impact of sea-level rise on key coastal habitats in the Pacific Northwest. In addition to raising awareness of the threat, the results of the study intend to assist coastal managers and other relevant decision-makers identify and implement strategies to minimize the risks.

Model results vary considerably by site, but the report finds that, overall, the region is likely to face a dramatic shift in the extent and diversity of its coastal marshes, swamps, beaches, and other habitats due to sea-level rise. For example, if global average sea level increases by 0.69 meters (27.3 inches), the following impacts are predicted by 2100 for the sites investigated:

Sea-Level Rise and Coastal Habitats in the Pacific Northwest

An analysis of the impacts for Puget Sound, Southwestern Washington, and Northwestern Oregon.