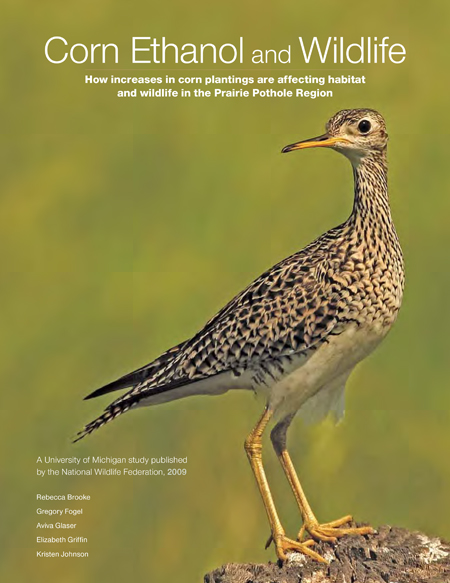 Government incentives have led to skyrocketing growth in the U.S. corn ethanol industry over the past five years. This has contributed to major increases in corn prices and corn demand, ultimately resulting in increased corn plantings across the country. Total U.S. corn acreage increased 19 percent between 2006 and 2007, to a level not seen since the Dust Bowl. About one-third of the nation’s corn crop is now diverted to ethanol plants. Farmers have shifted land into corn production from other crops, idle agricultural land, and native prairie, thereby causing wildlife habitat loss and degradation. Given that current legislation mandates increases in corn ethanol production through 2015, these patterns are likely to continue.

This study analyzes the current and potential impacts of increased corn ethanol production on wildlife and habitat in four Midwestern states: Iowa, Minnesota, North Dakota, and South Dakota. In addition to experiencing dramatic increases in corn plantings over the last five years, these states encompass the majority of the U.S. portion of a unique wetland/grassland ecosystem known as the Prairie Pothole Region. This region contains important native prairie and wetland habitat, and thus holds special importance for a variety of wildlife species.

Our research and analysis revealed that myriad and often redundant government incentives drive corn ethanol growth. We found that the greatest increases in corn plantings have occurred in areas important for wildlife. Our study demonstrates that wildlife populations have already been affected by these changes. Through a bird population analysis, we found that areas of high corn increases have had marked decreases, as large as 30 percent, in both the number of sensitive grassland species and the number of sensitive grassland individuals. Funding and resources for conservation programs have not kept pace with these increasing pressures on habitat and wildlife. If this trend is not reversed, we predict that expanding corn ethanol production will have an irreversible impact on habitat and wildlife across the Prairie Pothole Region.

If we proceed along the current trajectory without changing federal policies, the prairie pothole ecosystem may be further degraded and fragmented, and the many services it provides will be impossible to restore. The region will no longer be able to support the waterfowl cherished by hunters and wildlife enthusiasts across the country. Grassland bird populations, already declining, will be unable to rebound as nesting sites are turned into row crops. Water will become increasingly polluted and costly to clean as the grasslands and wetlands that once filtered contaminants disappear. However, it is not too late to preserve the ecological integrity of the Prairie Pothole Region.

Wise policy responses could turn the tide on prairie and wetland loss before this iconic landscape is lost forever:

How increases in corn plantings are affecting habitat and wildlife in the Prairie Pothole Region.