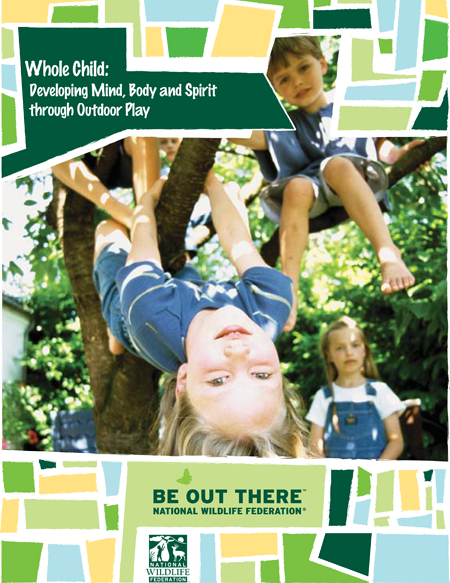 For American parents who want their kids to be fit, focused, and feeling good, the first step could be out in nature. National Wildlife Federation (NWF) has issued a health report, Whole Child: Developing Mind, Body and Spirit Through Outdoor Play, which reveals how America's technology overload is seriously affecting our physical and mental health.

Reviewed by an independent panel of medical experts, the report begins with a day in the life of the average kid in 2010, immersed in technology. It suggests that Americans wake up to the reality that children today spend only four to seven minutes outside each day in unstructured outdoor play. While their parents spent free time in activities like a neighborhood game of tag, building forts, or climbing trees, the modern child’s day includes far more screen time than green time.

While not considered a cure, exposure to natural settings may be widely effective in reducing ADHD symptoms in kids, according to researchers. In fact, research has revealed that that all children can benefit academically with nature regular outdoor time. According to NWF's March 2010 survey of nearly 2,000 educators, 78 percent of respondents feel students who spend regular time in unstructured outdoor play are better able to concentrate, more creative and more adept problem solvers.

According to Deputy U.S. Surgeon General Dr. David Rutstein, lack of outdoor time is a key factor in the childhood obesity epidemic and, if trends aren’t reversed, may contribute to a generation with not only less healthy but also shorter lives. “Overweight and obese adolescents have a 70 percent chance of becoming obese adults,” Dr. Rutstein said. “If this problem is not addressed, we will leave our children a legacy of shorter life spans for the first time in history.” In addition to obesity, the report highlights the rising rates of childhood diabetes, vitamin deficiencies, asthma, and vision problems, all of which can be tempered with adequate outdoor time.

An increasing number of experts recognize the role that outdoor time plays in enhancing kids’ mental health by helping to better connect them to one's self, to others and to the natural world. Children who spend much of their time indoors watching television or playing video games can become isolated and withdrawn, even if they are connecting to people online. Nature reduces stress and help kids interact in positive ways, as demonstrated by one study which found that children are more caring when spending time outdoors.

“I would rather write a prescription for safe, outdoor play for my pediatric patients than see them five years later with depression, anxiety and obesity,” says Wendy Kohatsu, M.D. with Santa Rosa Family Medicine and assistant clinical professor at the University of California in San Francisco.

Whole Child includes recommendations for caregivers, healthcare providers, educators and leaders so that, together, they can change America's indoor habits. Recommendations include asking parents to model “un-plugging” from technology, taking part in the Be Out There pledge to go outside as a family, and advising pediatricians to write prescriptions for regular outdoor time.