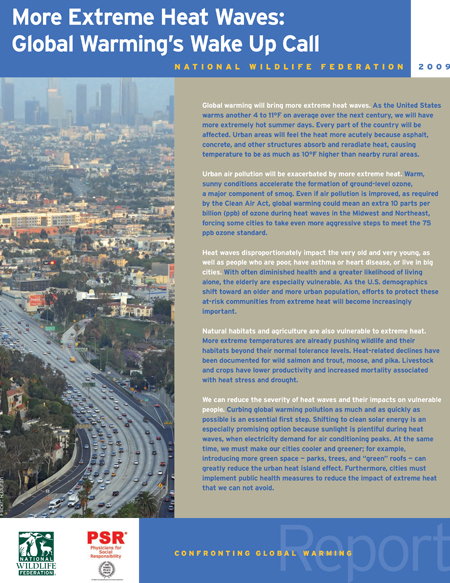 More extremely hot summer days are projected for every part of the country, and 30 large cities are especially vulnerable, detailed in a new report from the National Wildlife Federation and Physicians for Social Responsibility.

"Global warming is bringing more frequent and severe heat waves and the result will be serious for vulnerable populations," said Dr. Amanda Staudt, climate scientist for the National Wildlife Federation.

"That means air pollution in urban areas could get worse, bringing increased risk of heart attacks, strokes and asthma attacks. Children, the elderly, poor, and people of color are especially vulnerable to these effects."

"Global warming is one of the gravest health emergencies facing humanity. It's life-threatening and it's affecting us now," said Dr. Peter Wilk, MD, executive director, Physicians for Social Responsibility. "The science confirms that the frequency and duration of heat waves has increased significantly over the last 50 years. In the United States, heat waves already kill more people during a typical year than floods, tornadoes and earthquakes combined. Given these worsening trends, taking decisive action to stop global warming becomes a medical necessity."