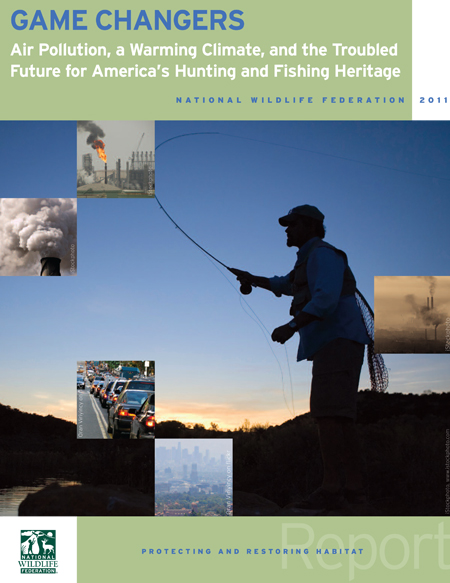 A new report from National Wildlife Federation highlights a number of wildlife species important to hunters and anglers that are harmed by toxic air pollution and climate change.

For American hunters and anglers, healthy populations of fish and game are considered a birthright. But woods and waters teeming with bass, trout, elk, ducks, and deer didn’t happen by accident. For more than 150 years, countless individuals have spoken up on behalf of the conservation of our fish and wildlife. Hunters and anglers have contributed more than $10 billion to fish and wildlife conservation, and in a typical year pump $75 billion into the economy. And in a future increasingly characterized by urban sprawl and the demands of modern life, retreating to wild places with a rod or gun in hand is a cherished means of reconnecting with those sportsmen conservationists who came before us and re-invigorating ourselves to step up to the conservation challenges of our time.

America’s remarkable storehouse of wildlife is threatened by assaults unknown until modern times. Toxic air pollution and a warming climate are a double whammy for wildlife, and some of our most popular and beloved game species are paying a heavy price. Fish are disappearing from lakes and streams. Birds are taking to wing with heavy metals and other contaminants in their bodies. Big game populations are being pushed out of their historic ranges by a warming climate.

In a single generation, the future for game and fish is changing. It’s time for this generation of American hunters and anglers to continue the legacy of speaking up for wildlife.

There are four specific airborne threats that are endangering the habitats of wildlife species. Each affects wildlife in places as diverse as urban parks and remote wilderness regions, but they come from the same sources: the smokestacks of power plants and refineries as well as America’s fleet of automobiles.

Mercury contamination, primarily resulting from coal-burning power plants, has long been identified as a major issue for many fish species. Small prey fish all across the country are contaminated from mercury in the air, and as predator fish eat these smaller prey, mercury accumulates in their tissue. Top-level predator fish such as brown trout, walleye, and largemouth bass are favorite fish for the frying pan, but more and more regions are under strict warnings about the human consumption of mercury-laced fish. Long-term mercury exposure can cause neurological symptoms such as difficulty walking, blindness, memory problems, and even death. For pregnant mothers, mercury exposure can lead to a risk of permanent damage to a fetus’ developing brain. The dangers of mercury aren’t limited to aquatic ecosystems, however. Emerging research is showing how mercury harms terrestrial mammals and even migrating songbirds, prompting scientists to reconsider how mercury negatively impacts larger ecosystems.

Even in remote, wild regions, acid rain has long been identified as a killer of forests, lakes, and streams. The "acid" in acid rain is from sulfur dioxide, most of which comes from coal-burning power plants. Scientists are now learning that acidification of aquatic habitats may even alter the ability for some fish species to recognize threats such as predators —– ushering in new questions about how chemical pollutants might affect not only the health of wildlife, but the intricacies of wildlife behavior.

Automobile and industrial emissions emit the compounds that help form ground-level ozone, or smog, which is only now beginning to be identified as a game-changer for game and fish species. Long known to exacerbate respiratory and cardiopulmonary difficulties in humans, ozone is emerging as a threat that damages the leaves of sensitive plants, making them susceptible to disease and less able to produce and store food. Wildlife habitat and entire forest ecosystems are at risk.

Carbon pollution from coal-burning power plants, refineries, and vehicles is causing worldwide climate change. Already, a warming climate is changing our world. From sea level to the highest mountain peaks, entire ecosystems are in retreat. Wetlands are vanishing. A warming ocean is spawning more and more powerful storms. Many wildlife species are struggling to adapt. Some never will.

These changes are leading to direct habitat loss as well as more insidious changes, such as decreases in snowpack that result in a massive loss of fish spawning sites and increased summertime temperatures that will change the wildlife communities of forests and streams forever. From game species as varied as ruffed grouse and mountain goats, to venerated fish such as salmon and smallmouth bass, America’s rich community of fish and game is at risk from a warming world.

This report puts a spotlight on 10 species of American wildlife that hold a special place in the hearts of conservationists, and that are battling some of most difficult challenges in the natural world. These fish, birds, and mammals are not alone, however. Behind each of these icons are many more that face a troubling future due to toxic air pollution and rising temperatures. Those modern threats will change the game for American hunters and anglers—–unless conservationists and the sporting public stand up to fight for clean air and an end to the pollution that leads to a warming climate.

Air pollution, a warming climate, and the troubled future for America's hunting and fishing heritage.