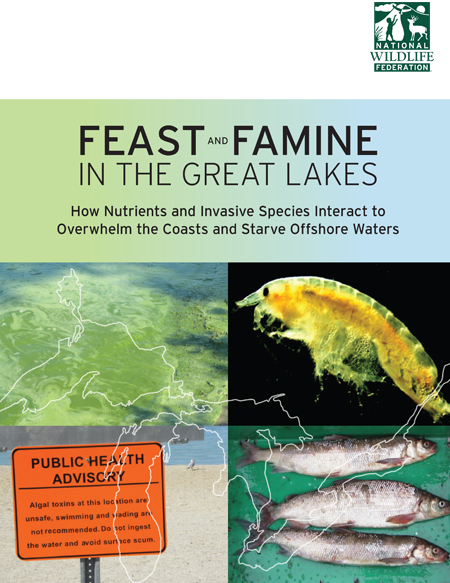 The Great Lakes: on the road to recovery, veering close to ecosystem collapse, or both? In fact, recent research indicates the lakes have undergone profound changes over the past two decades, and ongoing changes related to various stressors threaten the ecological health of the lakes in ways unseen since human development in the region began.

In 2005, a team of Great Lakes scientists highlighted the many ongoing stressors facing the lakes, from nutrient pollution to hydrological changes to aquatic invasive species. The report, Prescription for Great Lakes Ecosystem Protection and Restoration, warned that the lakes could be facing a tipping point leading to “irreversible ecosystem changes” without urgent actions to address these and other stresses. The report highlighted many instances of Great Lakes “ecosystem breakdown,” including dramatic declines in the lower portions of the food web, particularly of a shrimp-like organism (Diporeia) in the sediments that served as an important food source for many fish species. Though exact mechanisms are not clear, it appears that the widespread colonization of lake bottoms by invasive mussels has impaired the ability of Diporeia and similar organisms to thrive (possibly through changing nutrient cycling), which in turn continues to threaten the well-being of food webs in the Great Lakes.

Six years later, ecosystem problems persist in the lakes, and in some respects have worsened. New research shows that not just Diporeia have been decimated across the lakes — so have populations of prey fish (fish consumed by larger predators). For example, in the offshore waters of Lake Huron, prey fish biomass has declined by 95% in less than 20 years. Scientists predict similar declines could occur in Lake Michigan. Researchers are still investigating the causes, but one likely factor contributing to widespread ecosystem change is the filtering activity of invasive quagga and zebra mussels. This filtering activity, which removes plankton and other suspended particles (including the nutrient phosphorus) from the water column, results in direct competition for food with other species and has fundamentally altered energy and nutrient flow pathways through the food web. One result is that fish in the offshore such as native lake whitefish and burbot and naturalized Chinook salmon in Lake Huron have steeply diminished in numbers and in health as their prey base is altered.

Lake Erie and nearshore waters in other Great Lakes, however, face the opposite problem: too many nutrients are wreaking a different kind of havoc. Excessive nutrients in nearshore waters — in particular phosphorus from both agricultural and point sources — have caused or contributed to problems such as toxic algal blooms, green algae blooms (including the nuisance alga Cladophora), avian botulism, and the Lake Erie central basin “dead zone”. Indeed, the summer of 2011 witnessed one of the most extensive harmful algal blooms ever recorded for western Lake Erie, leading to numerous recreational advisories.

How can one part of the Great Lakes (coastal and nearshore areas) be overcome with excessive nutrients while other parts (offshore waters) are deprived of sufficient nutrients? Invasive mussels, now numbering in the trillions in Lake Michigan alone and widespread throughout the Great Lakes, are a likely cause. Zebra and quagga mussels have sufficient filtering capabilities to sequester much of the nutrients already in or entering the lake waters and redirect them to nearshore and deeper bottom waters, reducing availability to other organisms. This phenomenon is encouraging explosive algal blooms in coastal areas and the formation of a nutrient desert in offshore waters, which has contributed to steep declines in fish populations. This is unprecedented: algal blooms caused by too many nutrients, and fish population crashes caused by too few nutrients.

There is no single solution to this ecosystem breakdown. The widespread changes in the Great Lakes nutrient cycle that are causing simultaneous feast and famine require sophisticated responses; one-size-fitsall measures are unlikely to succeed. Three overarching approaches can help address this dichotomy. First, management actions based on whole-lake objectives alone (or alternatively, focusing on one part of the system, such as offshore waters) are unlikely to be successful. Controls and management strategies need to take into account the different conditions of nearshore and offshore areas — as has been recognized to some extent, for example, with different phosphorus targets for western and eastern Lake Erie. In short, as part of an overarching lake- or ecosystem-wide management approach, we need to refine management and policy at smaller levels (e.g., sub-basin or watershed) as appropriate. Second, although implementation of policies specific to nutrients and invasive species (in particular invasive mussels) is critical, we need to explore policies that can address both stresses in an integrated way. For example, if research indicates an invasive species may be limited in part by nutrients, reduction in nutrient loads could slow its growth and spread while also reducing risks of harmful algal blooms. Finally, further nutrient reductions (particularly in targeted watersheds) are essential. Today in the Great Lakes, new nutrient loadings will in many cases continue to feed harmful or nuisance algae, or invasive species, rather than contribute to the growth of desirable fish species. We need to identify and implement measures that promote the growth of native and naturalized species, while minimizing (or ideally avoiding) benefits to nuisance or invasive species.

With these overarching approaches in mind, there are a variety of existing policy frameworks and tools that can help further nutrient reduction efforts, including the following:

Similar efforts are needed on the Canadian side. These include upgrading wastewater treatment plants to reduce nutrient loads, expanding natural vegetation cover in key watersheds, and expanding the scope of and improving best management practices on agricultural lands.

While a number of efforts are needed to address ongoing nutrient problems, it is clear that increased efforts are also needed to prevent additional major ecosystem changes from aquatic invasive species. Prevention must be a cornerstone of efforts addressing major vectors, including adopting more stringent ballast water discharge standards, a more aggressive screening and control program for organisms in trade, and strong measures to address canal and waterway transfer of aquatic invasive species (including restoring the hydrological separation between the Mississippi River and Great Lakes Basins in the Chicago area.) In addition, control and eradication measures for species already established must be pursued, including innovative biocontrol measures and fishery management practices that can target species of concern with minimal risk of other negative impacts.

Finally, there is a need for increased activity and funding in two broader areas related to nutrients and invasive species. First, targeted research and monitoring efforts are needed, particularly in nearshore areas, as well as improved binational coordination of all aspects of monitoring. Increased research efforts are needed to better understand nutrient dynamics and ongoing ecosystem changes and to help inform resource managers and policy makers addressing these complex changes. Second, increased education and outreach efforts are needed to inform the public of problems associated with nutrients and invasive species, along with ways the public can contribute to solutions. These efforts should utilize the numerous existing forums well suited to conduct this work, including agency outreach, university extension, and non-profit programs.

In summary, the Great Lakes are facing feast and famine from invasive species and excessive nutrient pollution. The lakes have faced daunting environmental problems in the past; in the 1960s, Lake Erie was plagued with harmful algal blooms, and many had written it off as beyond revival. However, the concerted efforts of citizens, environmental and conservation advocates, scientists, and policy makers to implement innovative solutions succeeded in restoring the lake. The challenges are no less severe today. While it is clear that further research and monitoring are needed to better understand changes in the nutrient cycle and other lake ecosystem changes, stronger actions are needed now, and we believe a combination of targeted and holistic approaches to address nutrients and invasive species together offers great potential. The lakes remain at a tipping point, and it is time for us to join forces and develop innovative policy solutions to the feast and famine crisis that today plagues the Great Lakes.

How nutrients and invasive species interact to overwhelm the coasts and starve offshore waters.