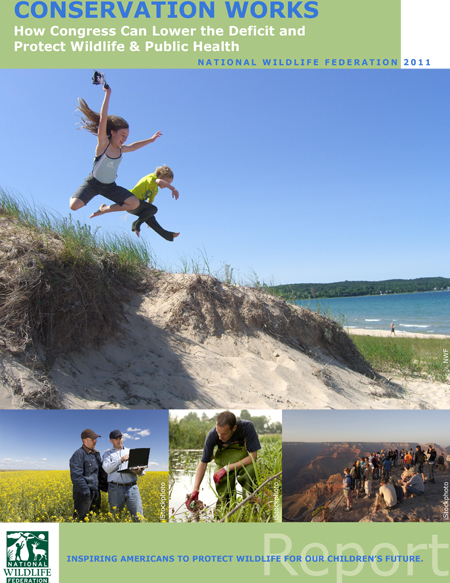 The federal government makes investments in our shared environment that all Americans benefit from every day. These investments account for only about 1 percent of the total federal budget but they deliver huge benefits, by enforcing air pollution standards, improving water infrastructure to keep our lakes and rivers clean and drinking water safe, and managing our national parks and other public lands. Clean water, clean air, healthy rivers, lakes and shorelines teeming with wildlife — these are benefits that every American has a right to enjoy, and that the U.S. Congress has a responsibility to protect.

Over the past year, the traditional legislative process has cut conservation disproportionately. Key programs such as the Land and Water Conservation Fund, State and Tribal Wildlife Grants and EPA’s geographic programs have been slashed by more than 30 percent, in contrast to overall non-defense discretionary spending, which has been cut by just 7 percent. These cuts to conservation threaten the future of our country's environmental and economic health, undermining the infrastructure that ensures we have clean air to breathe, water to drink, land to enjoy, and habitat for our country's wildlife. Further cuts to conservation will mean dirtier air, dirtier water and an overall weakening of our quality of life at a time when we cannot afford to lose any more.

To address America’s budget deficit, Congress created a 12-member “Joint Select Committee on Deficit Reduction” as a way to step outside the traditional bounds of the legislative process and partisan posturing during this critical time. As the federal deficit continues to grow, the National Wildlife Federation sees the work of the Joint Committee as an historic opportunity for Congress to set our country on a path toward a fiscally sustainable future by protecting programs that create jobs, save lives, and safeguard wildlife while cutting certain environmentally harmful subsidies.

The Joint Committee is charged with identifying at least $1.2 trillion in deficit reduction over the next 10 years. To meet this target, the joint committee may choose to increase revenue by reducing tax subsidies, cutting mandatory spending programs, or cutting additional discretionary spending. If the committee does not reach agreement on how to meet its goal, an automatic “sequestration” process kicks in, forcing across-the-board cuts to discretionary spending and some mandatory spending programs by the required $1.2 trillion. These discretionary spending cuts would inevitably undermine the investments that our country has made to preserve the health and safety of our water, air land and environment. In this scenario, federal spending in fiscal year 2021 will be almost $300 billion less than in the past fiscal year. And if this happens, the recent cuts to conservation programs would seem trivial in comparison.

The Committee faces important decisions about how to solve the nation’s deficit crisis. These members of Congress wield extraordinary power to make decisions that will reverberate for decades. It remains to be seen whether they will decide to cut tax subsidies to industries such as oil and gas that have seen record profits, or target programs that benefit millions of Americans every day in the form of clean air, clean water and a healthy environment.

This report highlights many of the conservation and environment programs that benefit millions of Americans in the form of sustainable jobs, health and overall quality of life. In particular, the report showcases the benefits of these programs in the states of each member of the Joint Committee, in an effort to demonstrate the impact that their decisions will have on their own states.

Conservation and environment investments directly help people in communities in every state. They create jobs, leverage additional public and private investment, and support infrastructure maintenance and improvements. A new economic study demonstrates that the great outdoors and historic preservation generate a conservative estimate of more than $1 trillion in total economic activity and support 9.4 million jobs each year. The outdoor recreation industry alone contributes $730 billion annually to the U.S. economy, supporting more than 6 million jobs and $49 billion in federal tax revenues. Grants issued under the Clean Air Act have had a direct impact on the health and welfare of millions of Americans: a report issued by EPA in 2010 estimated that the law has prevented 160,000 premature deaths, 130,000 heart attacks, 13 million lost workdays and 1.7 million asthma attacks.

These investments also have a multiplier effect that results in more jobs, higher incomes and increased property values, benefiting local businesses that provide goods and services, and supporting everyone from construction company owners to sport-fishing guides. But without federal assistance to help states and communities clean up contaminated waterways, reduce air pollution or protect wildlife habitat, these economic benefits will be lost.

Every American has a stake in the outcome of this process. We therefore urge the Committee to choose to protect the programs that benefit all Americans, rather than the business interests of a few. It would be a grave mistake for the Committee to use this process to undermine the investments in clean air, clean water and a healthy environment that are vital to our nation’s future. National Wildlife Federation urges the members of the Joint Committee to preserve the conservation and environmental funding that helps make America and its communities healthy and strong. Specifically, the Committee should:

The solution is clear. The Joint Committee should raise revenue and protect the vital programs described in the pages of this report. The fate of America’s wildlife, public health, and economy rests upon their decision.

How Congress can lower the deficit and protect wildlife and public health.