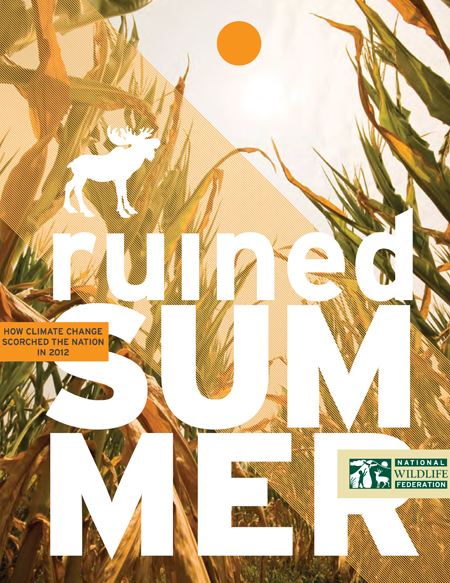 The summer of 2012 has been full of extreme weather events connected to climate change. Heat records have been broken across the country, drought conditions forced the United States Department of Agriculture (USDA) to make the largest disaster declaration in U.S. history, and wildfires have raged throughout the West. New research by world-renowned climate scientist James Hansen confirmed that the increasingly common extreme weather events across the country, like record heat waves and drought, are linked to climate change.

This report examines those climate change impacts whose harm is acutely felt in the summer. Heat waves; warming rivers, lakes, and streams; floods; drought; wildfires; and insect and pest infestations are problems we are dealing with this summer and what we are likely to face in future summers.

Unfortunately, hot summers like this will occur much more frequently in years ahead. Climate change means far more than hotter weather: as the atmosphere heats up, climate systems are altered in ways that impact forests, lakes, prairies, rivers, wetlands, and other habitats, as well as the communities and wildlife that depend on them. Average water temperatures in streams, rivers, lakes, and oceans are increasing, precipitation patterns are changing, and extreme weather emergencies such as droughts and floods are becoming both more frequent and severe.

To understand how 2012 represents what we can expect in the future, we must understand how climate change is connected to the weather we are experiencing. A recent scientific study published in the Bulletin of the American Meteorological Society, “Explaining Extreme Events of 2011 From a Climate Perspective”, found that some of the weather extremes around the world have become far more likely because of climate change. For example, climate change made the severe heat wave Texas experienced in 2011 twenty times more likely to occur than it would have been in the 1960s. Climate change made this heat wave hotter and last longer. Penn State geosciences professor Richard Alley puts it this way: “Humans have made some extreme weather events more likely, and they are happening. Just as a back-street gambler might beat someone in an honest game but has a better chance with loaded dice, nature might have caused this summer’s weather but we gave it a boost.”

By taking action now to reduce the amount of carbon pollution from the nation’s largest sources, and providing support for wildlife-friendly wind, solar, geothermal and biomass energy, we can reduce the impact of a changing climate and power a new clean energy economy for all Americans.

If we don’t enact the solutions we have on hand to reduce carbon pollution, wildlife, people, and our summers will suffer.

Is climate change ruining our summers?