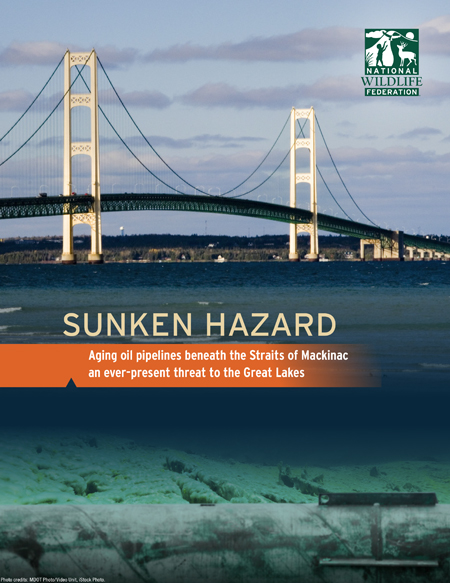 Motorists who travel over the Mackinac Bridge in northern Michigan are treated to one of the most spectacular vistas in all the Great Lakes. The five-mile-long bridge crosses a vast expanse of cobalt water that extends far to the east and west, well beyond the reach of the naked eye. The view is sublime, breathtaking.

From the bridge, which peaks at 199 feet above the Straits of Mackinac, sightseers have a bird’s eye view of waters that mark the confluence of Lake Michigan and Lake Huron. What they cannot see from the bridge, or anywhere else, is a looming threat that could devastate the upper Great Lakes.

Just west of the Mackinac Bridge, below the water’s surface, lie two pipelines, called Line 5, that carry a total of 20 million gallons of crude oil and natural gas fluids each day from Superior, Wisconsin to Sarnia, Ontario. The pipelines were placed in the Straits of Mackinac in 1953—the year President Dwight Eisenhower took office and one year before McDonald’s opened its first burger joint.

If either of those pipelines leaked, the resulting oil slick would likely devastate some of the lakes’ most bountiful fisheries, wildlife refuges, municipal drinking water supplies and one of the region’s most popular tourist attractions: Mackinac Island. A significant rupture would cause an Exxon-Valdez scale oil spill spreading through Lakes Huron and Michigan, the heart of the largest freshwater seas in the world.

It’s not an empty risk: the pipelines are owned and operated by Canadian-based Enbridge Energy and Line 5 is part of the Lakehead system—one of the largest networks of pipelines in the world. Enbridge Energy is the same firm responsible for the largest and most costly inland oil spill in American history. These interstate pipeline networks are regulated federally by the Pipeline and Hazardous Materials Safety Administration (PHMSA), which is a federal agency under the Department of Transportation that enforces pipeline safety rules and regulations.

An Enbridge pipeline that ruptured near Marshall, Michigan, in July 2010 dumped about one million gallons of tar sands oil into the Kalamazoo River system. Federal investigators were scathing in their critique, likening Enbridge to the “Keystone Kops” and determining that Enbridge could have prevented the disaster if the company had properly maintained the pipeline and fixed dozens of known defects.

The Enbridge pipelines that cross the Straits of Mackinac have never spilled oil into the conjoined waters of lake Michigan and Huron, according to government officials. But evidence is mounting that there is reason to be concerned.

The Line 5 pipeline that crosses the Straits has a history of problems, just like the company that owns it. Pipelines deteriorate as they age, according to engineering experts, and the Line 5 pipes at the Straits have been subjected to fierce underwater currents, intense external pressure and varying water temperatures for nearly 60 years.

Compounding the threat is the fact that the pipelines cross the world’s largest source of surface freshwater, a sensitive ecosystem that cannot readily cope with large quantities of crude oil.

Additionally, Enbridge has set out to expand its Lakehead System—which includes Line 5—to carry more diluted bitumen and tar sands oil from western Canada. All of the lines within the Lakehead System transport Alberta tar sands-derived crude oil. Most concerning is the transportation of diluted raw tar sands oil or diluted bitumen (DilBit). Transportation of this product requires higher operating pressures, which in turn heats the line and could pose significantly higher risks of spills.

In this report, National Wildlife Federation examines the history of the Enbridge pipelines that cross the Straits of Mackinac, Enbridge’s environmental track record and what could happen if the pipes sprang a leak and pumped crude oil into the northernmost reaches of lakes Michigan and Huron.

This report is intended to point out the immediate need for proactive and consistent action to properly safeguard our Great Lakes from pipeline spills. History has proven that agencies and pipeline operators continue to favor a reactionary approach to pipeline oversight. Unless action is taken, an oil spill in the Straits of Mackinac isn’t a question of if—it’s a question of when.

We cannot allow Enbridge to play Russian roulette with the Straits of Mackinac. This report is a call for action to prevent Enbridge Energy’s widening oil stain from reaching North America’s freshwater seas.

Aging oil pipelines beneath the Straits of Mackinac an ever-present threat to the Great Lakes.