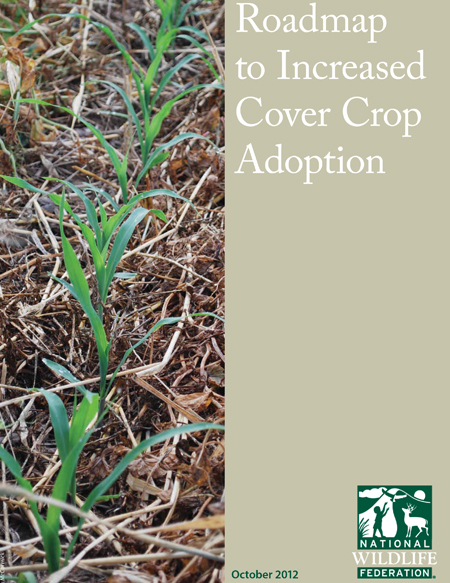 Cover crops are increasingly utilized by farmers and promoted by agronomists for the multiple benefits they contribute to soil and crop management systems. Yet, only a small percentage of cropland is planted to cover crops. In June of 2012, the National Wildlife Federation brought together 36 of the leading experts in cover crops in the Midwest and Great Plains for a meeting in Minneapolis, Minnesota (see appendix for list of participants). These farmers, scientists, extension specialists, and policy experts met for two days to discuss what they saw as the biggest barriers to expanded cover crop adoption and to lay out a “Roadmap” for addressing these barriers in order to achieve our common vision of 100 million acres of cover crops by 2025.

Cover crops are defined in this document as non-commodity crops either inter-seeded into living cash crops or planted onto bare fields during fallow periods to improve soil quality and nutrients available to plants. Within an optimal cropping system, cover crops can increase farm profitability through increased yields, reduced fertilizer costs, and reduced weed management costs. Cover crops retain nutrients that would otherwise leave the field via runoff, leaching, or evaporation, making those nutrients available for the next crop. By keeping soils covered, cover crops significantly reduce nutrient runoff and associated water pollution. Cover crops also remove carbon dioxide from the atmosphere, storing it safely in soils. Finally, cover crops provide habitat and an additional food source for wildlife in the winter because they often continue to grow after the harvest of commodity crops and rejuvenate much sooner in the spring.

Currently, there is no national census or other survey tool that estimates national cover crop adoption. The United States Department of Agriculture (USDA) Conservation Effects Assessment Project (CEAP) estimates that cover crops were used on less than 1% of acres in the Upper Mississippi Basin Region from 2003-2006. Singer et al. surveyed 1096 farmers in Illinois, Indiana, Iowa, and Minnesota on their cover crop use in the fall of 2005, finding that 8% of the farmers planted cover crops that year, while 11% had used cover crops within the previous five years. Iowa State University Extension surveyed 1360 farmers in 2010 and found that 12% of Iowa farmers planted cover crops within the previous five years.

The National Wildlife Federation (NWF) has been encouraging the USDA’s National Agriculture Statistics Service (NASS) to collect data on cover crop use. In the absence of this national level data, NWF has been working to obtain a baseline estimate of cover crop adoption, NWF surveyed cover crop seed dealers. Based on seed sales, NWF estimates that in 2011, at least 1.5 million acres were planted to cover crops in the Mississippi River Basin states of Arkansas, Colorado, Iowa, Illinois, Indiana, Kansas, Kentucky, Michigan, Minnesota, Missouri, Montana, North Dakota, Nebraska, Ohio, Oklahoma, and South Dakota. To put this in perspective, ERS estimates that there are 250 million acres of cropland in those states. Although baseline studies of cover crop adoption are limited, anecdotal evidence suggests that cover crop adoption is increasing, but still quite limited in scope. The objective of this document is to define the barriers to cover crop adoption in the Mississippi River Basin and provide a framework to accelerate adoption in the region.

Defining the barriers to cover crop adoption and providing a framework to accelerate adoption.