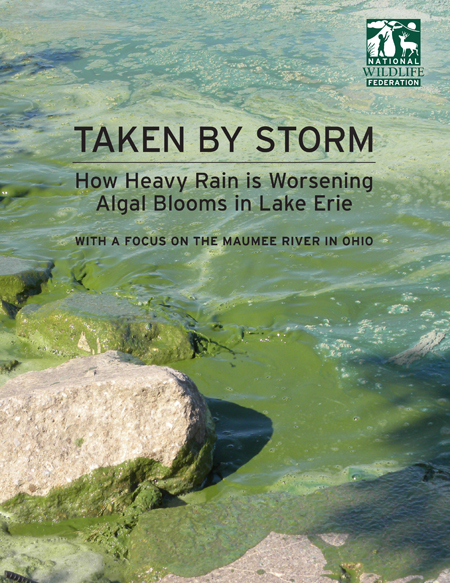 Lake Erie is a vital resource for the Great Lakes region and the nation at large, providing a home to thousands of wildlife species, drinking water for millions of people, and a billion-dollar fishing industry. At the same time, Lake Erie is extremely vulnerable. Since the late 1990s, harmful algal blooms (HABs) have returned to the lake in force. Microcystis algae, which produce the toxin microcystin, have captured the attention of scientists, public health officials, and environmental advocates alike. There is widespread agreement that HABs are one of the most significant problems facing the people and wildlife of Lake Erie today.

Record-breaking rains—and droughts—are affecting the size of these toxic blooms. Why? Rain causes runoff of nonpoint source pollutants such as excess fertilizer and livestock waste, which cause an upsurge in lake nutrient levels and promote the growth of harmful algal blooms. Unfortunately, the changing global climate is bringing both extreme rainfall and significant drought to the Great Lakes region. These pendulum swings, which cause many industries to suffer, are contributing to record-breaking harmful algal blooms.

As a follow-up to the National Wildlife Federation’s 2011 report Feast and Famine in the Great Lakes: How Nutrients and Invasive Species Interact to Overwhelm the Coasts and Starve Offshore Waters, this report examines this relationship between large rain events, nutrient runoff, and harmful algal bloom size, focusing on the input from Maumee River in Ohio.

The Lake Erie basin boasts the largest percentage of agricultural land in the Great Lakes region. Several tributaries carry phosphorus from surrounding farmland into Lake Erie. The Detroit and Sandusky Rivers are also contributors. Although all tributaries warrant attention, the Maumee River is a surrogate example for other watersheds. The Maumee River Valley, located west of Lake Erie and spanning Ohio, Michigan, and Indiana, is the largest tributary to Lake Erie by area. Though dissolved reactive phosphorus loads are increasing in all of the watersheds, observed dissolved reactive phosphorus loads into Lake Erie from the Maumee River have increased 218 percent since 1995.

The following storm snapshots showcase eight seasons of rainfall over the Maumee River Valley, consequent phosphorus loads, and harmful algal blooms in Lake Erie.  Four of these seasons experienced record-break-ing rains (1998, 2003, 2008, 2011), and three experienced significant drought (1999, 2001, 2012), while one is a moderately wet season (2002). This report does not try to prove a direct 1:1:1 correlation between rainfall, phosphorus loads, and harmful algal bloom size, rather it does show that rainfall is the master driver of dissolved reactive phosphorus (DRP) loads in these specific cases. Information in this report highlights a need to account for changes in weather and climate, especially with regards to rainfall amounts, when combating the complex problem of Lake Erie’s harmful algal blooms.

Climate change is causing the Midwest/Great Lakes region to experience warmer air temperatures and large rainfall events—along with swings of drought. Heavy precipitation events are particularly on the rise. Since 1958, days with very heavy precipitation have increased by 31 percent.   Additionally, the seasons are changing. Warm conditions in the late winter or early spring can cause rain on snow events, expanding the time period of runoff potential. Although we identify a few storm snapshots in this report, the wettest spring on record for Ohio produced a memorably massive harmful algal bloom in 2011.  This is an alarming snapshot of disaster to Lake Erie if record-breaking rains and excess nutrient loads continue. Scientists recently ran climate scenario models that show larger rain events of rainfall amounts of about 1.2 inches, have the potential to be twice as frequent over western Lake Erie basin.

In order to prepare for heavier rain events we need to reconsider some agricultural practices and policies. More innovative policies and programs, combined with more outreach to land managers, farmers, and agricultural retailers will help ensure that heavy storms do not exacerbate Lake Erie’s existing vulnerability to phosphorus loading and harmful algal blooms. Better practices will also reduce unintended expenses from fertilizer applications being washed away.

How heavy rain is worsening algal blooms in Lake Erie.