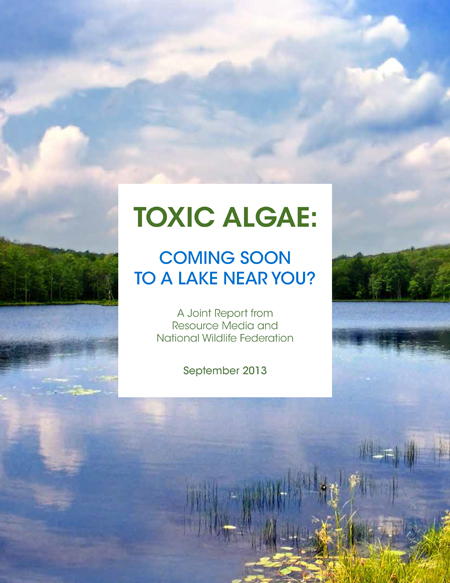 Labor Day weekend: the last taste of summer. A time for fishing, boating and swimming with family on our nation’s lakes. Increasingly, also a time when the health threats posed by blue-green algae keep people out of the water. The green gunky stuff is strangling a growing number of inland US waterways and releasing toxins that threaten the health of people, pets and wildlife. A new online map is the first attempt to show the scale and scope of reported freshwater hazardous algal blooms (HABs). It is a resource for communities to both report and track freshwater toxic algae outbreaks.

A familiar issue to Midwesterners and Great Lakes-area residents, the problem is spreading across the US. The same pollutants that create the annual Gulf of Mexico Dead Zone and coastal hazardous algae spur freshwater toxic algae. Yet even though hazardous algal blooms strike every state in the US, the issue continues to fly beneath the radar of national attention, because:

To provide more information on the scope of the problem, Resource Media, a nonprofit communications firm, began tracking warnings and advisories in 2012 as they appeared in news reports and on state agency websites. It has developed the first national online map that shows the health warnings and advisories that have been issued over the summer of 2013. The website, ToxicAlgaeNews.com, also includes a spreadsheet of locations and links to reporting sources. The map is a step in the right direction, but only displays reported outbreaks. Given the irregularities in state tracking and reporting, much more is needed to more accurately capture the true scale and scope of the problem, especially since freshwater toxic algae have been found in all US states.

Last summer, 20 states issued warnings as record drought and high temperatures baked the nation.This year, another 20 states—some different than last year—have closed lake beaches and issued public health advisories for dangerous toxin levels. Yet in media coverage, freshwater HABs are still treated as a sporadic local concern, not a national water quality problem. Coverage rarely references the breadth of freshwater toxic algae outbreaks and their cumulative cost. Resource Media has joined together with National Wildlife Federation, which is mobilizing citizens from Florida to the Great Lakes, to call for more attention and support to restore our wetlands and streams. We must save our summers, our drinking water, and the health of our cherished lakes and rivers.

In the absence of national, comprehensive monitoring, Resource Media’s map of toxic algae warnings does not necessarily imply that the problem is worse in one state or another. Instead, it may reflect that a state is doing a better job of monitoring than other states with no reported incidences.

A joint report from Resource Media and National Wildlife Federation