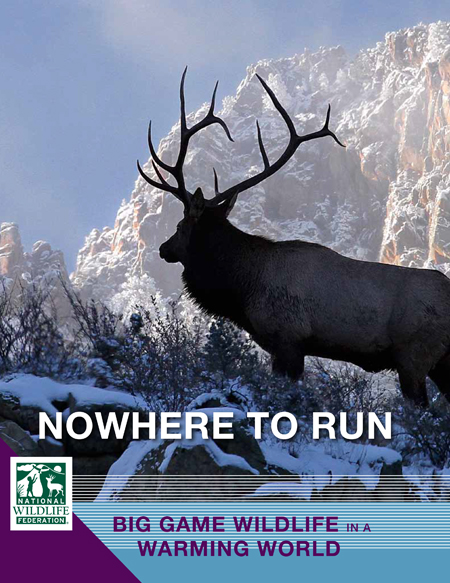 Even the largest species on the landscape—our nation’s treasured big game wildlife—are being directly exposed to changing climate.

Huge investments were made to restore big game in the 20th century and continue today. These investments have come from many sources, especially special excise taxes paid by hunters through the Federal Aid in Wildlife Restoration Act. As a result, many big game habitats and populations have been successfully restored across the Nation. However, restoration of caribou, deer, moose, mule deer, pronghorn and white-tailed deer are expected to be set back by climate change. Bighorn sheep, still at a small fraction of their historical levels, can ill-afford the added challenge of climate change. It appears that bears will be less affected and only elk may fare better, at least for the near future.

Trekking into the outdoors is popular, whether to hunt, watch big game, camp or hike. As climate change progresses, these activities will expose outdoor adventurers to an increased risk of Lyme disease. Its carrier, the deer tick, is expected to survive warming winters in greater numbers and to increase its range by more than half.

Carbon emissions, which drive climate change, can be addressed by implementing the Environmental Protection Agency’s authority under the Clean Air Act to reduce carbon pollution from power plants. Development of clean energy sources, such as solar and wind, facilitates reducing fossil fuel use. Restoration of natural carbon sinks has the double benefit of taking carbon out of the atmosphere and providing habitat for big game and other wildlife.

Actions must also be taken to help safeguard big game wildlife from the climate impacts of carbon already polluting our atmosphere. These include promoting the practice of “climate-smart conservation” by explicitly taking climate change into account in our wildlife and natural resource management efforts. Maintaining or restoring connections between winter and summer ranges and reducing other stressors is important. Key habitat areas must be protected where they exist now or could exist in the future. Hunters can support wildlife agencies as they adjust seasons and management plans to account for the effects of climate change.

Big game wildlife's future is at stake in a warming world.