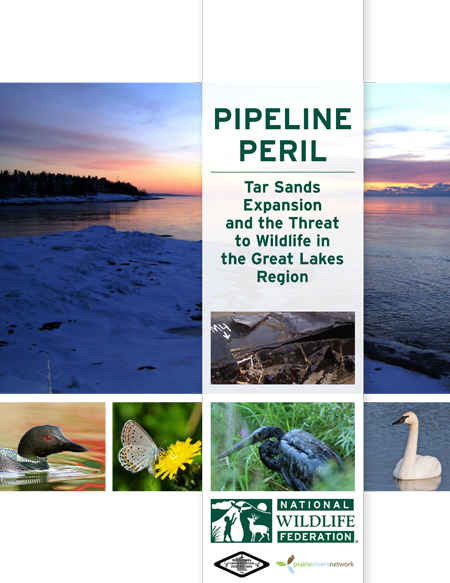 From the skyscrapers of bustling Chicago to the remote, rocky shores of Lake Superior, the Great Lakes region is one of America’s most precious resources for people and wildlife. The lakes directly provide one in ten Americans with water for drinking and agriculture, and offer countless opportunities to connect with the outdoors. Few places on earth grant as many opportunities to enjoy wildlife from fishing to bird watching to hiking. The Great Lakes region also provides a multitude of sporting opportunities including sailing, kayaking, running, biking or skiing along the gorgeous shores of these immense fresh water seas. The Great Lakes are the largest unfrozen freshwater source in the world and the region provides valuable habitat for iconic species like moose, lynx, wolves and loons, as well as endangered species like the beautiful Karner blue butterfly, cerulean warbler, and the prehistoric lake sturgeon.

Yet, a growing threat looms, putting the health and future of the Great Lakes region at grave risk.

The region is encircled by a vast array of pipelines, sending toxic, spill-prone, and impossible-to-clean-up tar sands oil through the Great Lakes region. Tar sands oil is a carbon-intensive, sticky substance that is mined and drilled from deposits in the evergreen forests and rich wetlands of Northern Alberta, which is eventually refined into gasoline, jet fuel, and other transportation fuels.

The Direct Threats to the Region

Tar sands oil is far more carbon polluting than conventional fossil fuels, with up to a 37% higher life-cycle basis than regular oil. The tar sands oil industry currently plans a massive expansion of the mining and export of tar sands oil provided they are able to transport their product to market. These tar sands oil transportation projects and the development they will trigger will serve to lock in run-away climate change. The Great Lakes region has already begun seeing the harsh impacts of climate change, such as reduced water levels, increased frequency of intense storm events, and warmer water temperatures, all of which feed massive algae blooms. Algal blooms make recreation in the Great Lakes dangerous, smelly and unpleasant, and can also cause fish and wildlife dead zones in the usually productive Great Lakes.

More tar sands will mean more pollution from the oil refineries processing tar sands oil throughout the region. Unrefined tar sands oil is heavier and contains substantially more toxins than conventional oil, resulting in a more intensive and polluting refining process. These pollutants may also be released into the communities surrounding the refineries, harming wildlife and jeopardizing the health of people living nearby. Refining tar sands oil also creates a harmful, coal-like solid byproduct called petroleum coke, or petcoke. This byproduct is often stored in massive, uncovered piles outside of refineries, frequently along rivers, allowing dust from the piles to contaminate neighboring rivers and communities. Petcoke can also be burned to create electricity, releasing more carbon pollution to the atmosphere and further exacerbating all the negative impacts of climate change.

Tar sands oil poses unacceptable risks to the Great Lakes region’s treasures of wildlife, humanity and outdoor enjoyment. We do not have to accept those risks. Rather than building dangerous infrastructure that places our largest freshwater resources at risk, we need to invest in clean, wildlife-friendly energy sources and expand clean transportation solutions.

To protect wildlife, resources and communities, we recommend:

Tar sands expansion and the threat to wildlife in the Great Lakes region.