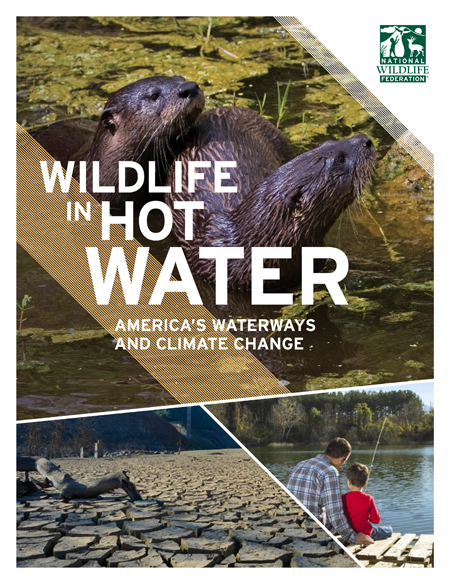 Changes include "earlier and more rapid snowmelt, fewer and more intense rainfall events, and more frequent and extreme droughts and floods." These and other changes in the water cycle are expected to have multiple and widespread ecosystem impacts.

The evolution of the rich diversity of our nation’s wildlife has been driven primarily by various geological and climatic conditions. Given that all life is dependent on water, the water quantity, timing, quality, form, and seasonality are among the major factors determining where and how various species live. In fact, the type of water available to species has had a huge effect on their evolution and characteristics—their size, appearance, behavior, feeding habits, reproduction and more.

Due to the close wildlife/water relationship, it is not surprising that climate change’s impact to wildlife is a major concern. A duck without water and a sea turtle without a nesting beach are not the legacies we want to leave our children.

This report examines how climate change is affecting and is expected to affect our nation's waterways and, in turn, our nation’s wildlife. It covers the impacts that climate change is having on waters and aquatic habitats "from the mountains, to the prairies, to the oceans" and everywhere in between.

Headwater streams and the wildlife they support are especially vulnerable to changes in the climate. They can be dramatically impacted by changes in rainfall, snowmelt, temperature, and timing of precipitation, among other conditions affected by climate change. Similarly, the many species that depend on these streams often have nowhere to go when these streams dry up, become too warm, or are affected by floods, fires, and droughts.

Climate change compounds the existing human-caused stressors of pollution, dammed rivers, invasive species, disease, and destruction of forests and wetlands. Some 147 freshwater fish species and populations are federally listed as threatened or endangered. An estimated 37 percent of all freshwater animals—from fish to crayfish to mussels—are considered at risk. The rate of aquatic species extinctions is five times higher than in terrestrial habitats. Climate change is only going to further stress the already highly-stressed freshwater aquatic life.

Lakes are affected by climate change in many ways, including through impacts to both the amount and quality of water. Some variability in lake water levels is normal and important for maintaining healthy lakeshore habitat, including wetlands, used by many fish and wildlife species.34 However, climate change exacerbates changes in lake levels, causing structural impacts to shoreline features such as beaches, barriers, dunes, and wetland extent, and in turn, to the fish and wildlife dependent on these areas.

Climate change also affects the usually seasonal mixing (spring and fall) of different layers of water that are stratified by different temperatures and other characteristics. When water stratification and mixing are affected, the entire chemistry of lakes is altered with subsequent impacts on aquatic life.35 And as water temperature rises, lake wildlife changes as it becomes less favorable for cold water fish like trout, and more favorable for other species that live in warmer waters.

Our vast blue oceans hold about 96.5 percent of all Earth’s water, and about 70 percent of the Earth’s surface is covered by water (saltwater and freshwater). From “sea to shining sea” our immense oceans have an enormous effect on global climate. In turn, climate change is rapidly altering the fundamental character of our oceans, threatening the countless species that depend upon them for survival. Rising ocean temperatures, changing ocean chemistry, and additional human-induced stressors such as marine pollution are having a profound effect on marine ecosystems.

The report also describes actions that we can and must take to protect our waterways for the benefit of people, wildlife, and wildlife habitats. These include implementation of the Clean Power Plan to reduce carbon pollution (CO2) from our largest sources—power plants; reducing America's use of the carbon-intense fuels—coal, oil, and gas; increasing energy efficiency and developing alternative energy sources such as wind, solar, and biofuels; safeguarding wildlife and wildlife habitat from climate change; facilitating adaptation of species and habitats to the changing climate; and supporting recent efforts to restore Clean Water Act protections to many of our nation's waters.

From the mountains, to the prairies, to the oceans, climate change threatens America's waterways.