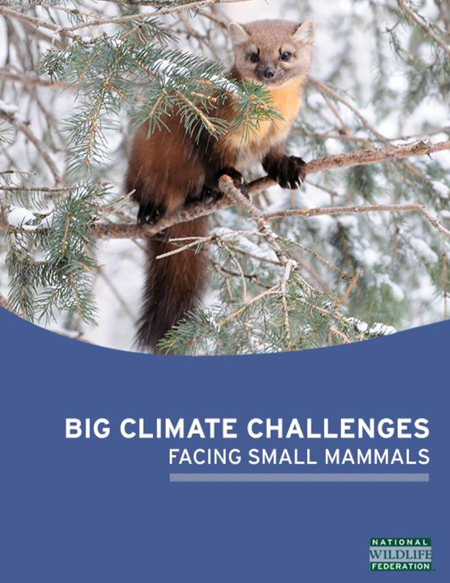 Across the United States and around the world, climate change is threatening wildlife – big and small. Changes to our climate are destroying critical wildlife habitat, causing habitat ranges to shift, increasing incidence of pests and invasive species, decreasing available food and water, changing the chemistry of the ocean, and increasing the rate of species’ extinction.

While many may think of polar bears, penguins, or moose when they think of climate change, it is important for us to also recognize the plight of smaller mammals like bats, fox, squirrels, and pika, which have an important place in the health of our ecosystems and economy.

This Groundhog Day, when Punxatawney Phil makes his annual prediction about the coming spring, we have an opportunity to learn how climate change poses a big threat to the smaller wildlife and wild places we cherish, and to the natural resources that we all depend on.

A subspecies of the fox squirrel that inhabits portions of the Delmarva (Delaware/Maryland/Virginia) Peninsula, this species once disappeared from 90 percent of its original range and was listed as an endangered species in 1967. Reintroduction efforts, protection, and better habitat management helped it recover, leading to its removal from the endangered species list in 2015.

Now, the Delmarva fox squirrel is expected to be on the run due to climate change. Sea level rise is projected to inundate and destroy several tens of thousands of acres of suitable forest habitat on the Delmarva Peninsula, which doesn’t bode well given squirrels prefer not to swim! Predicted increases in the intensity and duration of extreme weather events, particularly drought, may also harm the fox squirrel in years to come.

Built like little tanks, nine-banded armadillos are marching northward. These odd creatures with an external bony armor are the official small mammal of Texas. Now living throughout the Southeast, armadillos have trouble surviving bitter cold winter temperatures. Thus, as climate change brings warmer winters, the suitable area for armadillos is projected to expand Northward by hundreds of miles in the eastern United States, including Ohio and Virginia.

However, armadillos are not native and there are some negative aspects associated with their spread northward. Because they are a nest predator, there is a possibility they could put added pressure on ground dwelling bird species like the quail.

Related to weasels, Pine marten, also called American marten, are seldom seen. They prefer forested habitat and depend upon voles and mice for their diet, but they also eat nuts and berries in the summer. To catch their winter prey, American martens often travel under deep snow. In the late 20th century, marten populations were on the rise due to better forest management, improved management of regulated take, and even reintroductions in some areas.

Climate change may jeopardize this progress because of declining availability and depth of snowpack.  Where habitat is fragmented, martens appear to be reluctant to travel across non-forested habitat, especially with little or no snow present. This means that populations will become increasingly isolated as snowpack declines.

Together, we can help wildlife - big and small!

We know what’s causing climate change and we know the solutions. What we need now is national and local leadership to make smart energy choices and wise investments in protecting our wildlife and natural resources. Join the National Wildlife Federation in calling on our policymakers and communities to:

Smaller mammals have an important place in the health of our ecosystems and economy.