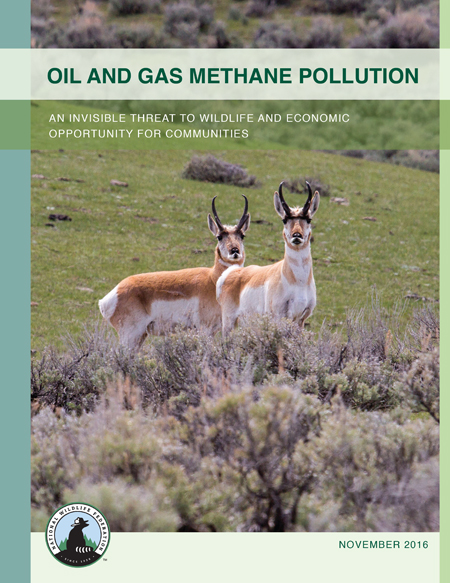 Methane gas pollution is a serious threat to wildlife. As a climate “super pollutant,” methane has over 80 times the climate altering potential as carbon dioxide (CO2) in the near term (over the next two decades), and is the second leading cause of climate change behind CO2. Fortunately, steps can be taken to protect wildlife by dramatically reducing methane pollution from its leading source, the oil and gas industry. This report outlines the wildlife-related threats posed by uncontrolled methane pollution from oil and gas operations and details how we can significantly curtail this threat while capturing a valuable resource that is now being wasted.

Wildlife are under siege from human-caused climate change, which is accelerating at an alarming rate. Changes to our climate are having profound impacts on critical wildlife habitat, causing habitat ranges to shift or be lost, increasing incidence of pests and invasive species, decreasing available food and water, and speeding the rate of species extinction. Indeed, climate change is partly to blame for a mass extinction event that some scientists say is now underway.

Methane is the chief component of natural gas, and is also a by-product of some oil production. Methane accounts for more than one-tenth of the greenhouse gases released due to human activity, with the oil and gas sector comprising the largest industrial source of that pollution. Much of this pollution is pure waste.

Throughout the oil and gas supply chains, an enormous amount of methane is often either intentionally vented or flared into the atmosphere or allowed to escape through leaky wells, pipes, pumps, and other equipment. This is not only polluting the atmosphere, it is wasting enough fuel to provide heat for 6.5 million homes. Methane pollution is a problem we can solve with cost-effective measures. The U.S. has adopted a goal to reduce methane emissions from the oil and gas industry by 40-45 percent by 2025. This goal can be met.

This report makes the following recommendations, which should be implemented by this Administration and the next to curtail the methane threat to wildlife:

An Invisible Threat to Wildlife and Economic Opportunity for Communities