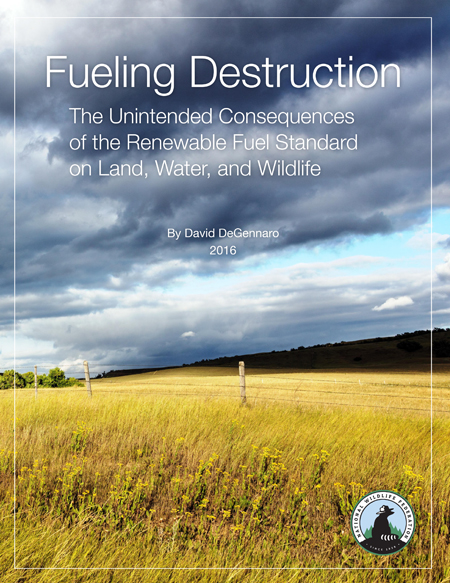 Since Congress passed into law in 2005 a federal mandate to blend corn-based ethanol and other renewable fuels into conventional gasoline, the increased demand for corn – which has supplied nearly all of these mandated fuels to date – has resulted in a major transformation on the landscape. Farmers, hoping to take advantage of rising prices for corn and other commodity crops, converted more than 7 million acres of native prairie, rangeland, wetlands, and forests into cropland – a devastating loss of important wildlife habitat and critical ecosystem functions like water filtering across the country. This destruction occurred despite language in the law meant to prohibit this type of land conversion, thanks in large part to the government’s refusal to enforce the provision.

With American farmers growing more corn today than at any time since the Great Depression, 40 percent of that crop now goes to produce fuel rather than feeding people or livestock. The staggering scale and swift rise of this massive biofuel industry has profound impacts to the environment as farmers cleared land, drained wetlands, and applied more fertilizers, pesticides, and irrigation water to maximize their production. These increased chemical applications paired with the loss of buffer strips and wetlands that filter storm runoff have contributed to declining water quality in the Mississippi River watershed, Gulf of Mexico, Great Lakes, and elsewhere. And the law has provided little, if any, of the promised reduction in harmful greenhouse gas emissions that were supposed to make it a model environmental statute.

Fueling Destruction compiles the mounting research bringing to light the unintended consequences of requiring the use of corn-based fuels, and calls on Congress to change the law to protect wildlife populations, safeguard clean water, and reduce greenhouse gas emissions.

The Unintended Consequences of the Renewable Fuel Standard on Land, Water, and Wildlife