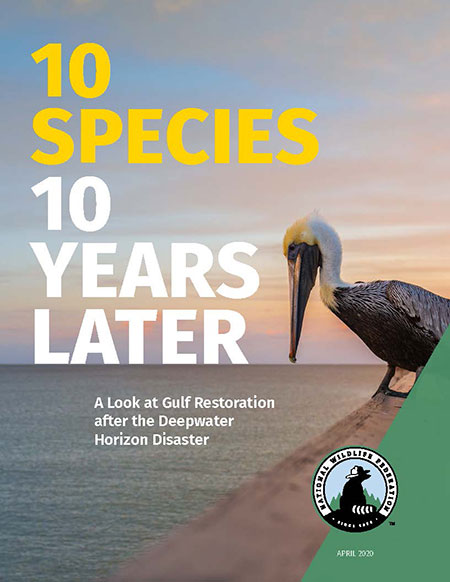 A Look at Gulf Restoration after the Deepwater Horizon Disaster

On April 20, 2010, the Deepwater Horizon oil rig exploded, killing 11 men and unleashing a torrent of oil and natural gas from BP’s Macondo wellhead into the Gulf of Mexico. By the time the well was capped 87 days later, an estimated 200 million gallons of crude oil and four million pounds of gas had escaped into the Gulf.

A decade later, the impacts of this disaster are still being felt in the Gulf. Serious, ongoing harm to many wildlife and habitats has been documented — with some species now at greater risk of extinction than before. The official assessment of the ecological damage from the oil spill — the Final Programmatic Damage Assessment and Restoration Plan and Final Programmatic Environmental Impact Statement — describes the disaster as “an ecosystem-level injury to the northern Gulf of Mexico.” This document, published in 2016, remains the most comprehensive summary of impacts to wildlife and their habitats, as it was based on hundreds of original studies.

The official estimates of harm were based on the best science available at the time, but new information is still coming to light. For example, a University of Miami study published in 2019 found that the footprint of the oil was actually 30 percent larger than previously thought — and that toxic concentrations of oil reached places, such as the Upper Texas Coast and the West Florida Shelf, not previously understood to have been affected.

This report, 10 Species, 10 Years Later: A Look at Gulf Restoration after the Deepwater Horizon Disaster, summarizes the best information available about the wildlife featured. We selected these species for many reasons: They represent different types of affected wildlife, they use a diversity of ecosystems and they offer an opportunity to discuss the wide scope of restoration efforts that are now underway. The research and restoration efforts described in this report were largely funded out of the criminal and civil penalties paid by BP and the other companies responsible for the oil spill.

In total, these penalties have made more than $16 billion available for restoring the Gulf of Mexico — an ongoing effort that will ultimately be the largest, most comprehensive ecosystem restoration effort in our nation’s history.

A Look at Gulf Restoration after the Deepwater Horizon Disaster