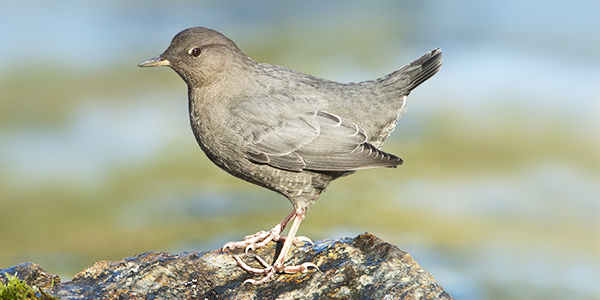 The American dipper is almost always seen in or along rivers and streams, where it frequently bobs or "dips" its body up and down as it searches for food. The dipper is a medium-size gray songbird with white eyelids. This bird can grow to be seven inches (18 centimeters) from beak to tail, with a wingspan of nine niches (23 centimeters).

American dippers live year-round in the western United States and into Canada and Alaska. They are also found in Mexico and Central America. This bird does not migrate south if its stream freezes over—instead it will move to a larger body of water nearby.

The diet of the American dipper consists of insects and their larvae, fish eggs, and small fish. On rare occasions, these birds can dive up to 20 feet (six meters) and walk along river bottoms in search of food. They can even move rocks along the bottom of a river to expose prey. To cope with such extreme conditions, they have a slow metabolism, lots of feathers, and the ability to carry extra oxygen in their blood. Other adaptations to an aquatic lifestyle are waterproof feathers and a nasal flap, which gives them the ability to close their nostrils in order to prevent water inhalation.

Females decide whether or not to mate with a male based on his song. American dippers build their nests in high places such as cliffs, boulders, or dams to protect their eggs from potential floods. Conditions are often very cold and wet when females lay their eggs, so mothers build insulated nests made with two layers of moss, grass, leaves, and bark to keep the eggs warm. Both adults take care of the young until they are ready to leave the nest, usually around 24 to 25 days after hatching. In the wild, American dippers live for approximately seven years.

1. American dippers were once known as water ouzels, a term used by naturalist John Muir.

2. An American dipper’s dome-shaped nest can be larger than a soccer ball.

4. In late summer, American dippers molt—or shed—their wing and tail feathers all at once. It takes only a few days for their new plumage to grow in.