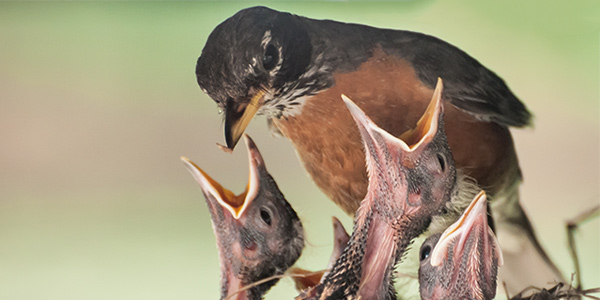 American robins are year-round visitors to suburban and rural backyards. A male robin is often easier to identify than a female. Males have rust-colored feathers on their chest, a yellow bill, a black head, and white outlines around their eyes. They also have gray wings and backs. Female robins look similar to males, but their colors are much duller and sometimes blend together, making identification difficult. Males are also easier to identify because only male robins sing their "cheerily, cheer up" song. This song is usually heard in the early morning, before and after sunrise. Robins also sing at dusk or when it's about to rain.

American robins live in woodlands, suburban backyards, parks, and grasslands with shrubs. Robins can be found year-round in the continental United States, and some migrate north to spend summers in Alaska. Squirrels, snakes, and other birds have been known to eat robin eggs and chicks. Predators to adult robins include hawks, snakes, and cats.

These birds are easily spotted hopping around city parks and lawns, searching for food in flocks. They have flexible diets and will eat whatever is most readily accessible, which can be dependent on the season. Robins often depend more on insects and earthworms in the spring, and consume more fruits and berries during the colder winter months. Members of the thrush family commonly hop while they forage for food. Not only are American robins in the thrush family—they're the most widespread species of thrush in the United States.

Males often arrive at nesting grounds before females and will defend their territory from other males by singing or fighting. The breeding season lasts from April through July, during which time males and females form pair bonds that continue while they raise their young. Nests are usually built in trees or shrubs, or on man-made structures such as the ledges of houses, barns, or bridges.

American robins begin breeding earlier than many other birds and can have two or three sets of young in the course of one breeding season. One clutch may have three to five eggs, which incubate for roughly two weeks before hatching. Females feed and brood the chicks, and the young birds leave the nest about two weeks after hatching. However young birds remain close to their parents after leaving the nest, following them and begging for food. The young robins stay on the ground for another two weeks, until they're able to fly well enough to venture off on their own. Robins begin breeding when they're about one year old and usually live for two years, though one wild robin was recorded to be 14 years old.

The American robin's population is large and appears to be increasing. The bird has an extremely big range and has been successful at adapting to human alterations of its habitat.