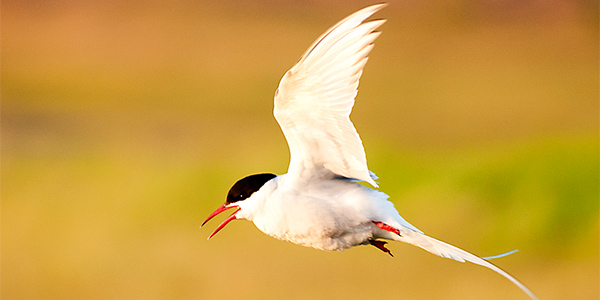 The arctic tern is a slender bird with narrow wings and short legs. This small but mighty flyer is well known for its long-distance migration, traveling each year from one end of the world to the other and back. The arctic tern's wingspan ranges between 25 and 30 inches (64 and 76 centimeters), while its body length averages 11 to 16 inches (28 to 41 centimeters).

The bird's coloration varies depending on age and season. When arctic terns hatch, they are gray or brown. As adults, their feathers are gray or white during the breeding season. Their beak and legs are red, and a black patch covers their head and forehead. In the non-breeding season, the bird's beak and legs are black, and the black patch of color on its head shrinks.

During the summer breeding season, arctic terns nest by the shore as far south as New England and Washington State. Their migration route follows the west coast all the way to Tierra del Fuego, the southernmost point of South America. Arctic terns can also be seen along the eastern coast of South America, Western Europe, Iceland, Australia, New Zealand, and on Pacific islands. Their winter habitat extends to the northernmost points of Antarctica.

Breeding grounds range in type and include boreal forests, islands, tundras, and rocky beaches. After migration, the birds spend their winter on pack ice. During this time, they undergo a molt and lose most of their feathers. Sometimes the feathers are lost more quickly than they can be replaced, and as a result the individual is flightless for a period of time.

When feeding, arctic terns hover in midair before plunging into the water to catch fish or crustaceans. Occasionally the arctic tern steals food from other birds by flying at them and startling them, causing them to drop their catch. They also capture insects.

In terms of distance, arctic terns are thought to have the longest yearly migration of any animal. Every year they travel from their Arctic breeding grounds to Antarctica and back—a distance of at least 25,000 miles (40,000 kilometers). In 2016, one arctic tern was tracked and recorded traveling 59,650 miles (96,000 kilometers) over the course of its yearly migration.

To breed, arctic terns often return to the same area in which they hatched. They are ground-nesting species, and both parents rear the young. Hatchlings stay with their parents for about three months before they venture off on their own. Reproductive maturity is reached at three to four years of age. At least one individual is known to have lived for 34 years.

The arctic tern population appears to be stable, but population trends are difficult to observe because of the birds’ remote range. Climate change may pose a threat because arctic terns rely on Arctic and Antarctic ecosystems, which are now changing.

The sooty shearwater also undertakes a lengthy migration. Electronic tagging of these birds revealed they travel nearly 40,000 miles (64,000 kilometers) every year, moving between New Zealand and the North Pacific.