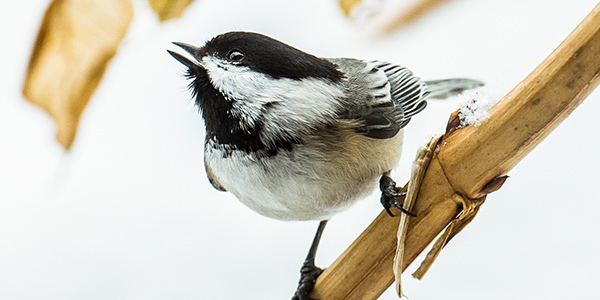 Black-capped chickadees are named for the “cap” of black feathers that covers the top of the bird's head and extends just below the eyes. Their cheeks and chest are white, their wings are gray with white edges, and their sides are beige. Adult black-capped chickadees are just four to six inches (10 to 15 centimeters) long with a wingspan of six to eight inches (15 to 20 centimeters).

Black-capped chickadees are non-migratory. They are found year-round from New England to the West Coast. In the West, their range extends as far south as New Mexico. In the east, they follow the Appalachian Mountains south to Georgia. Canadian residents and Alaskans can observe black-capped chickadees near their homes as well.

Black-capped chickadees are found in deciduous and mixed deciduous-evergreen forests, especially near forest edges. They are commonly found near willows and cottonwoods, and like to make their nests in the snags of alder and birch trees. Feeders and nest boxes can be used to attract chickadees to suburban backyards.

Hawks, owls, and shrikes capture adult chickadees, but nestlings and eggs are in more danger of being consumed by tree-climbing mammals. A chickadee’s alarm call sounds just like its name. Chickadees warn their flocks of nearby predators by sounding out “chickadee-dee-dee!”

Like many birds, black-capped chickadees are omnivorous. They eat a diet of seeds, berries, insects, invertebrates, and occasionally small portions of carrion. Chickadees also love to eat suet and peanut butter offered at bird feeders. However, chickadees have a penchant for storing food and eating it later, so they usually won’t stick around at a feeder for very long. They place food items in a number of different hidden locations, so chickadees must have excellent memories to keep track of their food.

Male and female chickadees excavate nest cavities in the soft, rotting wood of snags or build nests in abandoned woodpecker cavities. They also take readily to nest boxes filled with wood shavings. Females build the nest and fill it with up to 13 eggs. The male brings her food while she warms the eggs, and both parents take part in raising the young.

The average lifespan for black-capped chickadees is less than two to three years. The oldest chickadee on record was a male that lived for over 11.5 years.

Black-capped chickadee numbers are increasing due to large amounts of forest edge habitat, as well as nesting and feeding opportunities in backyards.

Chickadees are social birds that live in flocks. To keep up with changes within the flock—and to remember food cache locations—chickadees are able to replace old neurons with new ones. This essentially wipes out old memories and gives the birds more space to store new information.