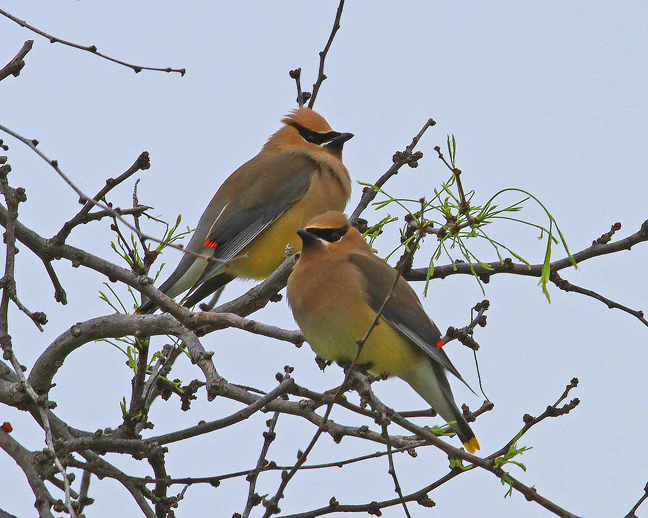 Cedar waxwings are named for the waxy red tips on their secondary wing feathers, but the purpose of the waxy secretions is unknown. These crested birds have pale yellow to lemon-colored bellies and a matching band of yellow at the tip of their square tail. A black mask edged in white extends from its beak and surrounds its eyes. The rest of the bird's plumage is gray to brown.

Males and females generally look alike, with the exception of the male's chin, which usually has a darker coloration than the female's. Cedar waxwings are six to eight inches (15 to 20 centimeters) in length with a 12-inch (30-centimeter) wingspan. The birds weigh about one ounce (28 grams).

Cedar waxwings are found year-round mostly in the northern half of the United States. Non-breeding winter populations are found from the Midwest and southern states down through Mexico, the Caribbean, Central America, and the northwestern reaches of Colombia. Summer breeding populations are found across Canada from British Columbia to Maine.

Cedar waxwings occupy a variety of habitats, from deciduous and evergreen woodlands to orchards, suburban parks, and backyards. Merlins (a member of the falcon genus), hawks, and common grackles are predators of adult cedar waxwings. Adults also sometimes fall victim to bullfrogs when they drink from ponds. Blue jays and house wrens consume juveniles and eggs.

Insects are consumed in summer, but these birds specialize in fruit-eating during the winter months. Cedar berries are the most popular food source, but other fruits are also consumed. Cedar waxwings pluck berries while perching, hanging upside down, or briefly hovering in midair. Unlike most fruit-eating birds that regurgitate seeds, cedar waxwings digest the entire fruit, and seeds are eventually dispersed in their feces. Occasionally they consume too much overripe fruit, which leads to intoxication and death.

Adult cedar waxwings form monogamous bonds during each breeding season. The courtship ritual begins when a male dances for a female and gives her fruit, flower petals, or insects. If the female is interested, the gift is passed back and forth several times until the female eventually eats it. Afterward the female takes the lead on choosing a nest site and constructing the nest. The pair produces one to two clutches from June to August. The male stays with the female while she incubates the eggs, bringing her food and guarding against predators. The young are ready to permanently leave the nest about 25 days after hatching, at which point they form flocks of their own. Cedar waxwings are highly social and communicate with other members of the flock using noises and physical displays. Both males and females reach reproductive maturity at one year and live up to eight years in the wild.

Cedar waxwing numbers have been increasing for a number of years, partly due to the use of berry-producing trees in landscaping and the conversion of agricultural land to forest. Additionally, they are protected under the U.S. Migratory Bird Treaty Act.

Some cedar waxwings have orange tail tips instead of yellow. This is not a normal color variation—it's actually caused by consuming the fruit of an introduced honeysuckle species, which results in cedar waxwings growing orange-tipped tail feathers.