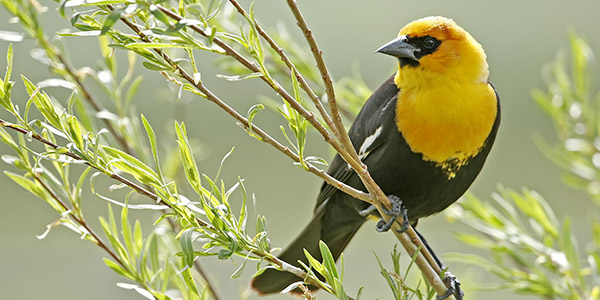 Yellow-headed blackbirds have a large head with a sharply pointed bill, a long tail, and a stout body. Males are black with yellow heads and chests, and white patches where their wings bend. Females and immature males are generally gray-brown with a duller yellow head. Both male and female birds grow to 8 to 10 inches (20 to 25 centimeters) long with a 15-inch (38-centimeter) average wingspan.

Yellow-headed blackbirds can generally be found from the Mississippi River westward. They spend the summer in the west-central United States and Canada and the winter in the western United States from California to Texas and south to Mexico and Central America. They nest primarily in large wetlands, but also in mountain meadows and along the edges of ponds and rivers. They spend the winter months primarily in farm fields, parklands and meadows. Snakes, red foxes, raccoons, skunks, gulls, marsh wrens, and other birds prey on eggs or young.

These birds are omnivores, eating both animal and plant foods. They often forage on the ground to eat seeds, spiders, grasshoppers, grains, and nuts. They eat mostly aquatic insects in the summer and seeds in the winter months. They form flocks to feed on the seeds of wild plants and waste grain in farm fields, taking turns feeding at the front of the flock.

Breeding takes place in wetlands. Males establish and defend territories to attract multiple females. To attract females, the male yellow-headed blackbirds sing short, raspy songs. Females create nests of wet vegetation that hang over the water among reeds, bulrushes, cattails, and sometimes wild rice. The nests shrink and tighten on the supporting vegetation as the wet vegetation dries. They lay three to five eggs that take about 11 to 13 days to hatch. They generally have one brood per season. The average life expectancy appears to be about 11 years, but some have been reported to live up to 18 years.

Yellow-headed blackbirds are abundant and secure throughout most of their range, although they are declining in some areas in the eastern parts of their range. They are sensitive to drought and loss of wetland habitat, as well as pesticides applied to farm fields where they forage in the winter.