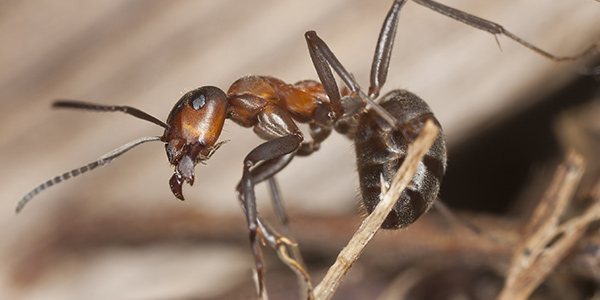 Ants are most closely related to bees and wasps, which all have a narrow waist that segments their body. The body is separated into three parts—the head, thorax, and gaster (the part of the abdomen behind the waist). There are more than 12,000 species of ant, most of which are black, brown, or red in color.

Ants are found almost everywhere on the planet. The only areas that don’t boast populations of ants are Antarctica, Greenland, Iceland, and some island nations. Most species live in soil, leaf litter, or decaying plants.

The ant's diet varies among species, but most eat leaves, seeds, small insects, nectar, and honeydew. Ants carry food back to the nest and are capable of carrying more than 10 times their weight.

Ants use their keen senses to communicate with colony members. They produce chemicals called pheromones, which are sensed by other ants using their antennae. They can also use their antennae or other body parts to send messages through touch. Touch messages are transmitted through stridulations, which are sounds and vibrations generated by one ant rubbing its body parts together. These forms of communication relay different messages, such as where food is located or what dangers are present.

Colonies of ants are separated into groups of individuals that have different jobs, such as workers, soldiers, and queens. The workers are all females that take care of the much larger queen and her young, or go out to find food. Winged males mate with queens and die soon after. Queens also have wings, but they break off after mating. Ants are an important prey species for many different reptiles, amphibians, arthropods, birds, and mammals. Longevity can’t be generalized to all ants, but queens usually live for several years and workers for only a few weeks or months.

Ant populations are stable. Ants often come into conflict with humans because they colonize homes and some—like fire ants—have stingers that can harm people. However, they are extremely important members of the ecosystems in which they’re found, and they help to aerate soil just like earthworms.

Ants usually form colonies with one nest and one queen—but some species have formed huge groups called supercolonies, which can have multiple nests and multiple queens. A supercolony may contain billions of ants that together span thousands of miles.