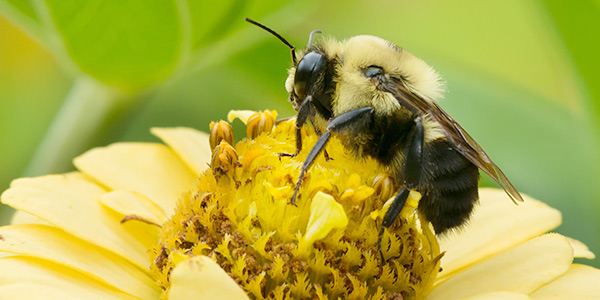 The first reaction most people have when they see a bumble bee is fear. It's painful and unpleasant to get stung by a bee, and some people have allergic reactions to the sting. But the next time you see a bumble bee, remember that although they sting, bumble bees are one of the most beneficial animals in nature, and they make our lives better every day.

The common eastern bumble bee is a pollinator of flowers and numerous fruit and vegetable crops, including tomatoes, blueberries, and cucumbers. Bumble bees have fur all over their bodies; these hairs collect and trap pollen, which the bees carry from one bloom to another.

The common eastern bumble bee can be found throughout the east coast from Maine to Florida and west through Ohio. It's often seen flying through the air in spring and summer near gardens, farms, and backyards. Their nests are located in woodlands and fields. Bumble bees are important food sources for other wildlife.

Bumble bees are pollinators, animals that move from plant to plant while searching for protein-rich pollen or high-energy nectar to eat. As they go, they are dusted by pollen and move it to the next flower, fertilizing the plant and allowing it to reproduce and form seeds, berries, fruits, and other plant foods that form the foundation of the food chain for other species—including humans.

Common eastern bumble bees are social insects that live in colonies. Newly mated queen bees hibernate over the winter, then emerge in early spring and begin searching for a nest site. Bumble bees have annual nests that usually contain 300 to 500 individuals. Worker bees develop first, followed by males and new queens toward the end of summer. In the fall, worker bees, males, and the old queen die.

Pollinators worldwide are in decline. Habitat loss, invasive species, parasites, and pesticides are largely to blame. The National Wildlife Federation has worked for many years to advocate for public policy and federal legislation that improves protection for America’s remaining native grasslands. These important habitats provide the milkweed needed by monarch butterflies, as well as many other flowering plants that are important to pollinators. However, native grasslands are disappearing faster than any other ecosystem in North America.

The National Wildlife Federation is working to help protect the less than 10 percent of native grasslands that remains. There are several ways for people to get involved with helping pollinators, including creating a sustainable garden that helps wildlife.

The common eastern bumble bee is so successful at pollinating fruit that it's been introduced in the western U.S and overseas to help in crop harvests. The success of these programs is still being determined, as well as the harm that can be caused by releasing a non-native species.