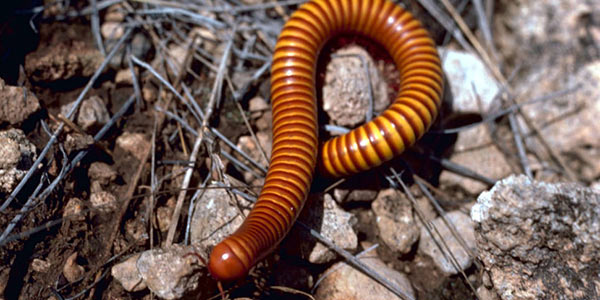 Millipedes are cylindrical or slightly flattened invertebrates. They're not insects—they’re actually more closely related to lobsters, shrimp, and crayfish. The word “millipede” translates to “a thousand feet”—but while millipedes have many feet, none of them quite have a thousand. Most species actually have fewer than a hundred. Millipede bodies are split into a number of segments, and each segment has two sets of legs that attach to the body's underside. Millipedes look very different from their centipede cousins, which have one set of legs per segment that stick out to the body's sides.

There are 7,000 species of millipede in the world, and 1,400 of these occur in the United States and Canada. The smaller ones are less than an inch (2.5 centimeters) in length, but the common spirobolid millipede can grow to more than five inches (13 centimeters).

Millipedes are found in every U.S. state, including Alaska and Hawaii, as well as in Puerto Rico and the U.S. Virgin Islands. Moist soil beneath decaying leaf litter or mulch is a millipede's prime habitat. Millipedes lack stingers or pinchers to fend off predators like birds, toads, and small mammals. Instead they rely on their hard exoskeleton as a first line of defense. Some species can even produce hydrogen cyanide, a noxious liquid that is toxic to small animals. Millipedes sometimes find their way into basements, but they’re mostly harmless to homes and people.

Millipedes move slowly through soil and organic matter, breaking down dead plant material and rejuvenating the soil, much like earthworms. When they become overly abundant, they sometimes damage seedlings in gardens.

Millipedes lay their eggs in the soil each spring. When the offspring hatch, they have only a few pairs of legs. After each molt, they gain new segments and legs until they reach adulthood. After molting, millipedes consume their exoskeletons to gain back valuable nutrients.

There’s still much we don’t know about millipedes and their conservation. Many people only become concerned with millipedes when the critters venture into their gardens or homes. Millipedes do not bite, sting, or infest food, fabric, or wood, and they are usually beneficial to gardens, as they break down decaying plant matter. When they do become nuisances, they can be controlled by removing leaf litter, decaying plants, and moisture sources from near the home.

Californian millipedes in the genus Motyxia are bioluminescent. They glow greenish-blue in the dark.

University of Nebraska-Lincoln Institute of Agriculture and Natural Resources