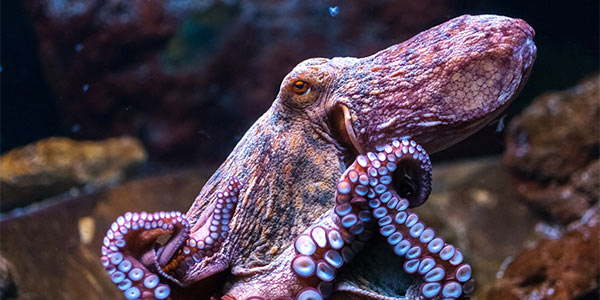 The octopus is a marine mollusk and a member of the class Cephalopoda, more commonly called cephalopods. Cephalopoda means “head foot” in Greek, and in this class of organisms, the head and feet are merged. A ring of eight equally-long arms surround the head. They use their arms to "walk" on seafloor. The undersides of the arms are covered with suction cups that are very sensitive to touch and taste. The sack-like body is perched atop the head, which has two complex and sensitive eyes, while the mouth is on the underside. Octopuses have a hard beak, which they use to pierce the shells of crustacean prey.

Octopuses have three functioning hearts. Two of the hearts work exclusively to move blood to the gills, while the third pumps blood through the rest of the body. Rather than iron-based blood, their blood is copper-based, which is more efficient at transporting oxygen at low temperatures and makes their blood blue in color.

Octopuses are solitary creatures excellent at camouflaging and concealing themselves. They are about 90 percent muscle, and because they lack bones, they can fit through very small spaces. Their skin contains cells called chromatophores that allow the octopus to change color and pattern. They are believed to be quite intelligent—capable of learning, using tools, and remembering locations.

There is tremendous range in the size of octopus species found in U.S. waters. The giant Pacific octopus (Enteroctopus dofleini), found off the Pacific coast of the United States from California to Alaska, is the largest octopus species in the world. It has an arm span that can reach 14 feet (four meters). The common octopus (Octopus vulgaris), found along the east coast of the U.S., is much smaller, growing up to about three feet (0.9 meters). The red octopus (Octopus rubescens), found along the Pacific coast, grows to about 20 inches (51 centimeters).

Octopuses are found in every ocean of the world and along every coast of the United States. Octopuses live in coastal marine waters and spend much of their time in dens—small holes and crevices in rocks and coral. They are generally solitary and territorial. Moray eels, fish, seals, sperm whales, sea otters, and many birds prey on octopuses. Octopuses use several different strategies to evade predators—they camouflage themselves by quickly changing their skin color, they make colorful displays or eject ink to startle or confuse potential predators, they squeeze into small crevices to escape, and they quickly propel themselves through water.

Newly hatched octopuses will eat small foods such as copepods, larval crabs, and sea stars. Adult octopuses feed on crabs, clams, snails, small fishes, and even other octopuses. All species of octopus have venom of varying levels of toxicity, which they inject using a beak that is similar to a bird’s. They typically hunt at night, pouncing on their prey and wrapping it in the webbing between their arms. They penetrate hard-shelled prey with their beaks.

The male initiates mating by approaching the female. He has a specialized tip at the end of one arm that transfers sperm to the female’s oviduct. The female looks for a suitable den site and lays the eggs, attached in chains, to the rock or coral or the den. The eggs can number in the hundreds of thousands for some species. The female guards and cares for the eggs, aerating and cleaning them until they hatch. As soon as they hatch, the young are able to swim, eat, and produce ink. The male parent dies soon after mating and the female survives only until her brood has hatched. An octopus will generally live for about one to three years, depending on the species.

Octopuses are spread throughout a large ocean area and are solitary, which makes it difficult to determine the status of their populations. They are not believed to be under threat, but they are sensitive to pollutants. Scientists are still discovering new species of octopuses.

Octopuses move using jet propulsion—they suck water into their mantle cavity, then quickly contract their muscles to force the water out through a narrow siphon, aiming the water to steer in a particular direction.

What Behavior Can We Expect of Octopuses?, by J.A. Mather and R.C. Anderson, The Cephalopod Page