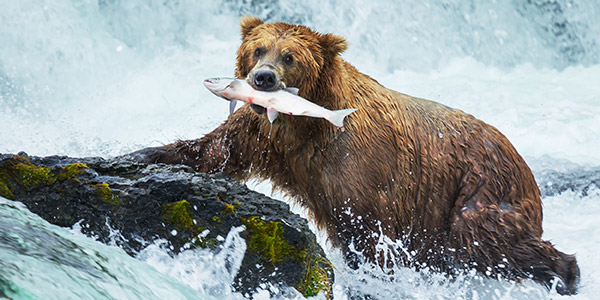 The grizzly bear is a kind of brown bear. Many people in North America use the common name “grizzly bear” to refer to the smaller and lighter-colored bear that occurs in interior areas and the term “brown bear” to refer to the larger and typically darker-colored bear in coastal areas. However, most of these bears are now considered the same subspecies.

Grizzly bears are large and range in color from very light tan (almost white) to dark brown. They have a dished face, short, rounded ears, and a large shoulder hump. The hump is where a mass of muscles attach to the bear’s backbone and give the bear additional strength for digging. They have very long claws on their front feet that also give them extra ability to dig after food and to dig their dens.

Grizzly bears once roamed throughout the entire western United States south into Mexico, including the Great Plains and along rivers in desert habitats. Control actions and habitat loss extirpated them from 98 percent of their original habitat in the U.S., including the Great Plains and all habitats south of Yellowstone National Park and Grand Teton National Park in Wyoming, including California, Idaho, and Washington. Populations persisted in the Northern Rocky Mountains including Yellowstone and Glacier National Parks and in northwestern Montana and extreme northern Idaho next to Canada. A large population of grizzly bears lives inland in Alaska and northern Canada. The southern populations in Canada’s British Columbia and Alberta are greatly reduced. Thanks to conservation efforts since about 1975, grizzly bears are recovering well in Yellowstone and elsewhere in the Northern Rockies and are even beginning to recolonize prairie habitats along the Rocky Mountain Front in Montana. Grizzly bears can be found in woodlands, forests, alpine meadows, and prairies. In many habitats they prefer riparian areas along rivers and streams.

Grizzly bears are omnivores. The most commonly eaten kinds of plants are fleshy roots, fruits, berries, grasses, and forbs. If grizzly bears are on the hunt, their prey can include fish (especially salmon), rodents like ground squirrels, carrion, and hoofed animals like moose, elk, caribou, and deer. They are especially good at catching the young of these hoofed species. Grizzly bears can also target domestic animals like cattle and sheep and cause economically important losses for some ranchers. The National Wildlife Federation has a program on National Forest lands surrounding Yellowstone Park to prevent attacks on domestic livestock by purchasing the grazing allotments from ranchers.

Grizzly bears use sounds, movement, and smells to communicate. They growl, moan, or grunt, especially when females are communicating with their young or during mating season when male bears can fight each other fiercely for the opportunity to mate with receptive females. Grizzly bears also rub their bodies on trees to scratch and to let other bears know they are there.

Winter can be very tough for many species of wildlife, because the season brings harsh weather and little food. Grizzly bears hibernate in warm dens during the winter to minimize energy expenditure at a time when natural foods are not available and to permit their tiny young to be born in a warm and secure environment. Throughout the summer and autumn, grizzly bears build up fat reserves by consuming as much food as they can find. In late fall or winter, the bears find a hillside and dig a hole to serve as their winter den. When inside the den, grizzly bears slow down their heart rate, reduce their temperature and metabolic activity, and live off stored fat reserves. Pregnant females give birth in the dens and nurse their cubs until they are large enough to venture outside in the spring as snow melts and new food become available.

Depending on the length of the winter season, grizzly bears can stay in their dens for up to seven months. They don’t even go to the bathroom during this time. Grizzly bear hibernation is not as deep of a sleep as some other hibernators, like bats or ground squirrels, and they will quickly wake up when disturbed. Females with newborn cubs are the last to leave their dens in the spring. Females with older cubs emerge earlier and solitary females and males are the first to exit dens in the spring. Pregnant females are the first to enter dens in the fall followed by females with cubs; solitary males enter dens the latest.

Grizzly bears begin to look for mates in the spring and early summer. Females can mate with more than one male during her breeding season. When a female grizzly becomes pregnant, the development of the embryo temporarily stops for several months, a process called “delayed implantation.” Delayed implantation is characteristic of all bear species and some other families of carnivores, including weasels and seals. If a female bear is unable to gain enough weight during the summer and fall, her body will tell her to not proceed with the pregnancy and the embryo will reabsorb. This gives her a head start on gaining enough weight to have a successful pregnancy the following year. When female grizzly bears enter hibernation, the embryo implants in her uterus and begins gestation. In January or February, female grizzly bears give birth to one to four cubs (usually two). The female will care for her young inside the den until spring, when they finally step out into the world.

The mother cares for her young for at least two more years, feeding and protecting them. When the cubs are two and a half years old, they typically separate from their mother. In areas with little food, the cubs may stay with their mother longer. Typically separation happens when the female enters breeding condition and attracts males, which can be a threat to the cubs. At around five years of age, grizzly bears reach sexual maturity.

Grizzly bears are mainly solitary and territorial, except for mothers and their cubs, or when a plentiful food source is discovered. Grizzly bears are known to congregate at rivers with many fish and at improperly fenced garbage dumps. Grizzlies can run pretty fast, reaching speeds as fast as 35 miles an hour for very short sprints. They are good swimmers too. Cubs can climb trees to evade danger, but they lose this ability as their front claws grow longer. Grizzly bears can live to be 30 years in the wild, but most die before age 25.

Grizzly bears are federally listed as threatened. They were excessively overhunted by humans, and now there are less than 1,500 grizzlies left in the United States south of Canada; there are also about 31,000 in Alaska. The National Wildlife Federation is fighting for grizzly bears to make sure they have room to roam and can safely coexist with humans.

Through our Adopt-a-Wildlife-Acre program, we work to acquire land outside of Yellowstone National Park to expand the range of the Yellowstone grizzlies. We also work to re-establish extripated populations—for example, in the wilderness areas of Central Idaho, where adequate habitat exists to sustain a secure and sustainable population. The National Wildlife Federation also helps connect habitat by advocating and working to create wildlife corridors and fight to make sure Congress properly funds conservation programs so that wildlife managers have the resources they need to help grizzlies and other wildlife. In addition, we're leading the charge to make sure climate change is not only addressed, but also that wildlife managers are able to assure that habitats that change in response to climate change remain adequate to sustain grizzly bear populations.

Grizzly bears received their name because their brown fur can be tipped with white. This gives them a “grizzled” look, especially when backlit by the sun.