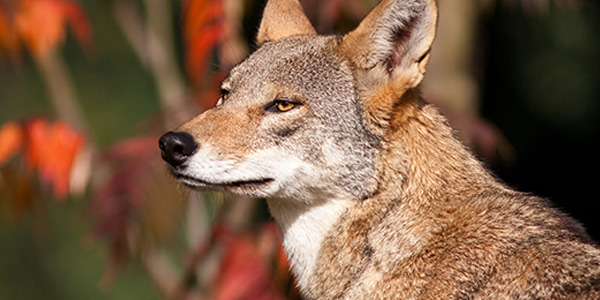 Red wolves are lean canids, often with black-tipped bushy tails. Their coats are mostly a brown or buff color, with some black along their backs. There is sometimes a reddish tint to the fur on their muzzle, behind their ears, and on the backs of their legs. At a glance, a red wolf may look somewhat like the domestic German shepherd.

The red wolf is between the size of a gray wolf and a coyote. They are about four feet long and stand about 26 inches at the shoulder. Red wolves weigh anywhere between 45 and 80 pounds, with males averaging about 60 pounds and females about 50 pounds.

Historically the red wolf ranged from southeastern Texas to central Pennsylvania. Today the only place red wolves can be found in the wild is in eastern North Carolina's Albemarle Peninsula. Equally at home in forests, swamps, and coastal prairies, red wolves can thrive in a wide range of habitats.

Red wolves are carnivores, though their diet can vary depending on what prey is available. Mostly they hunt smaller mammals like raccoons, rabbits, and rodents, along with white-tailed deer. Within their territory, red wolves will travel up to 20 miles in search of prey.

Red wolves mate for life, and each pack is formed around the breeding pair. Usually red wolves form a group of five to eight, composed of the breeding male and female and their offspring from different years. The pack is a very close family unit. Older offspring will help the breeding male and female raise their younger siblings, and will also attend the den. Within one to three years, the younger wolves will leave the pack in search of their own mates and territory.

Each pack has its own home range, which the wolves will hunt in and defend from other canids. Red wolves are fiercely territorial creatures and will even fight other wolves if needed. Red wolves breed once a year, from January through March. Anywhere from one to nine pups are born roughly nine weeks later in April or May. After about 10 days, the pups' eyes open. For several weeks after this period, the other members of the pack keep a close eye on the pups, keeping them within the den until they mature.

The dens themselves are well hidden near stream banks, downed logs, sand knolls, or even drain pipes and culverts. The adult pack members will range and return with food for the pups until they are strong enough. In the wild, red wolves typically live five to six years, and as long as 14 years in captivity.

Smaller and ruddier in color than their gray wolf cousins, the red wolf is one of the most endangered canids in the world. Though red wolves once ranged across the southeastern United States, years of hunting and habitat loss had driven the species to the brink of extinction by 1970. As part of an ambitious captive-breeding program, the U.S Fish & Wildlife Service captured the 14 remaining red wolves they could find in the wild. These wolves are the ancestors of the 75 to 100 animals that now live in North Carolina, the first animal to be successfully reintroduced after being declared extinct in the wild.

Within their ecosystem, the wolves play a valuable role in keeping numbers of prey like deer in check. In turn the smaller prey populations are less likely to balloon out of control and consume all available nutrients in their habitat. Additionally, though no studies have conducted to quantify this, the wolves’ preference for nuisance species, like nutria and raccoons, helps to reduce damage to crops and other human activities.

Though the red wolf has come a long way, there are many threats to the species in the long term. While they are a distinct species, their interactions with coyotes pose a serious risk of hybridization. Coyotes have moved into the habitat range formerly occupied by the red wolf and now compete with the reintroduced wolves for resources. Though the smaller coyotes do not pose a direct challenge to red wolf territory, any potential offspring between coyotes and red wolves endangers the red wolf’s long-term viability as a unique species. Thankfully management actions by wildlife managers, such as sterilizing territorial coyotes, are limiting hybridizations events, and giving red wolves the advantage and opportunity to increase their numbers.

Human interactions also pose a risk to the red wolf. Their entire habitat in the Albemarle Peninsula rests just three feet above sea level, and as a result climate change poses a serious threat. Though shy by nature and unlikely to confront humans, further development and habitat fragmentation increases the chance of conflict between the two species. Some of these interactions may be accidents caused by auto collisions, but some confrontations are more malicious.

In the past few years there has been a rash of red wolf killings. In less than a month in late 2013, six red wolves were found shot, and the attacks continue. The presence of tampered radio tracking collars and the ongoing attacks outside of hunting season suggests evidence tampering and foul play. In a population of less than a hundred animals, the impact of these attacks is immense.

Red wolves communicate through body language, scent marking, and a series of vocalizations. These include the characteristic howl, along with a series of barks, growls, and yaps. The red wolf’s howl sounds somewhat similar to a coyote’s, but is often lower pitched and lasts longer.