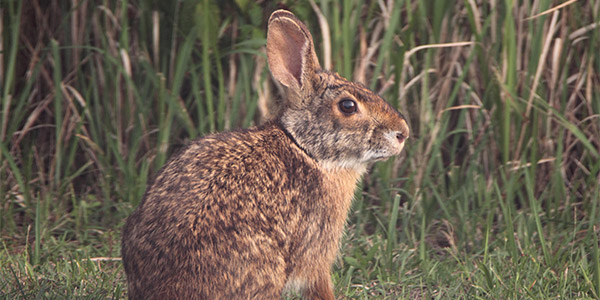 The swamp rabbit is the largest member of the cottontail genus. Although it is larger in overall size than other cottontails, it has smaller and rounder ears and coarser fur with a more yellow cast. Its thick fur is dense enough to waterproof its skin, and is usually a mix of dark brown, rusty brown, and black. Its throat and tail are white, and it has cinnamon-colored circles around its eyes. Swamp rabbits weigh between three and six pounds. Their total length varies from 16 to 22 inches, with males generally growing slightly larger than females.

Swamp rabbits are found in the Gulf Coast and south-central region of the United States. Swamp rabbits are well named—they prefer to live in swampy lowlands, floodplains, cypress swamps, and along edges of rivers and creeks. The rabbits are often found near water and in the cover of thickets, stumps, or fallen trees. They spend the day under cover and emerge at dusk to forage. Predators of swamp rabbits include the American alligator, raptors, bobcats, gray foxes, coyotes, snakes, dogs, and humans.

All the members of a swamp rabbit population breed around the same time (which is called synchronous breeding). The breeding season typically falls between February and August. The females give birth to up to six offspring. They make nests of grasses and twigs in a depression on the ground under a brush pile or log. Newborns' eyes open after four to seven days. Young leave the nest after about two weeks. Swamp rabbits reach sexual maturity after 23 weeks. Most females will have two to three litters per year. Few studies have been done to examine the lifespan of the swamp rabbit, but it is estimated they live an average of 1.8 years and may live up to nine years.

The swamp rabbit is considered secure overall. It is locally abundant in some regions, but in states such as Oklahoma and Missouri, its range is rapidly diminishing due to degradation and loss of wetland habitat.

Swamp rabbits are adept swimmers. When a predator gets close, these rabbits are likely to jump in the water and swim away, or dive under roots or overhangs to escape. In Georgia in 1979, there was a well-publicized incident involving a swamp rabbit and then-President Jimmy Carter, in which a swamp rabbit that was being chased by hounds jumped in the water and swam up to President Carter’s fishing boat. He shooed it away by splashing water with a paddle.

The Mammals of Texas, by William B. Davis and David J. Schmidly