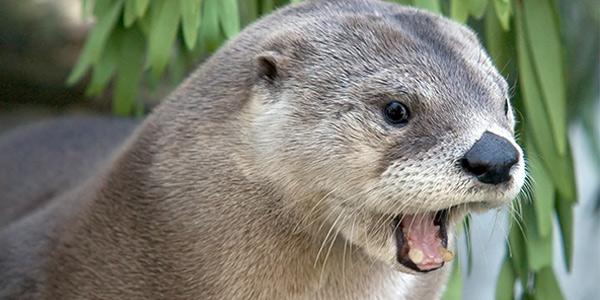 The playful North American river otter is well adapted for semi-aquatic living. The mammals have thick, protective fur to help them keep warm while swimming in cold waters. They have short legs, webbed feet for faster swimming, and a long, narrow body and flattened head for streamlined movement in the water. A long, strong tail helps propels the otter through the water. They can stay underwater for as many as eight minutes. North American river otters have long whiskers, which they use to detect prey in dark or cloudy water, and clawed feet for grasping onto slippery prey. They are very flexible and can make sharp, sudden turns that help them catch fish. Their fur is dark brown over much of the body, and lighter brown on the belly and face. On land a river otter can run at speeds of up to 15 miles (24 kilometers) an hour—they can slide even faster. Their playful snow and mud sliding, tail chasing, water play, and snow burrowing activities also serve other purposes—they help strengthen social bonds and let young otters practice hunting techniques.

A river otter can grow three to four feet (0.9 to 1.2 meters) long including its tail and weigh between 11 and 30 pounds (5 to 14 kilograms). Males are generally larger than females. The tail makes up about a third of their total length.

The North American river otter occurs in much of Canada and the United States, except for portions of the Southwest, and in Mexico in the Rio Grande and Colorado River delta areas. They can thrive in any water habitat, such as ponds, marshes, lakes, rivers, and estuaries—in cold, warm, or even high-elevation areas—as long as the habitat provides adequate food. River otter dens are along the water in abandoned burrows or empty hollows. The dens have entrances underwater so they can be easily accessed from the water. Bobcats, alligators, coyotes, raptors, and other large predators will sometimes prey on North American river otters.

River otters eat a variety of aquatic wildlife, such as fish, crayfish, crabs, frogs, birds’ eggs, birds and reptiles such as turtles. They have also been known to eat aquatic plants and to prey on other small mammals, such as muskrats or rabbits. They have a very high metabolism, so they need to eat frequently.

River otters communicate with whistles, yelps, growls, and screams, as well as touch and body posture. They also scent mark using scent glands near the base of their tails that produce a strong, musky odor.

River otters breed in late winter or early spring. Adults generally give birth to between one and three pups, which are blind and helpless when born. They first learn to swim after about two months. River otters generally live alone or in small social groups. They can live eight to nine years in the wild but have lived up to 21 years in captivity.

North American river otters were hunted and trapped extensively for their fur in the 19th and 20th centuries, and are still hunted in some places. They were extirpated from portions of their range, but conservation and reintroduction efforts are helping populations to recover. However habitat destruction and water pollution still puts these animals at great risk, especially because they are so specialized.

North American river otters can close their nostrils to keep water out during long dives.