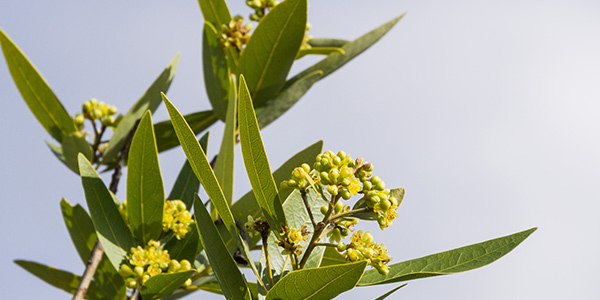 California bay laurels are broad-leaved evergreen trees with rounded, oblong, or pyramidal (pyramid-shaped) crowns. They are in the same family as avocados—the Lauraceae. Young trees have smooth bark, but as they age, the bark turns flaky and scaly. The most noticeable feature of this tree isn’t its looks, but its aroma. The early settlers of the West gave this species the nickname “pepperwood,” because when the thick, dark green leaves are crushed, they give off a scent like pepper. In fact, parts of California bay laurels have been used by American Indian tribes for hundreds of years as food seasoning. Dried leaves are still used today to add flavor to meals, although some people are severely allergic to the spicy oils in the leaves.

Depending on habitat conditions, California bay laurels can grow as small shrubs or large trees. The largest specimens reach over 100 feet (30 meters) tall, but a more typical height is 40 to 80 feet (12 to 24 meters).

As their name implies, California bay laurels are native to California, specifically along the coast and in lower elevations of the Sierra Nevada. They can also be found in the southwestern corner of Oregon. California bay laurels can grow in full sun or partial shade, and occupy a diverse variety of habitats, from humid coastal forests to dry shrublands. The largest California bay laurels take root on floodplains and in areas with nearby water sources. In drier conditions, they take on a much smaller shrub form.

One of the greatest concerns for management of this species is its susceptibility to a fungal disease called heart rot. Old or scarred trees are often invaded by this fungus. The wood from this tree is commercially used in cabinetry, furniture, paneling, and interior trim.

Leaves of the California bay laurel have been used by people to get rid of head lice and to discourage fleas. Scientists now think that dusky-footed woodrats use the aromatic leaves to keep fleas out of their nests. For some people, the oils from the leaves of this tree can be toxic.