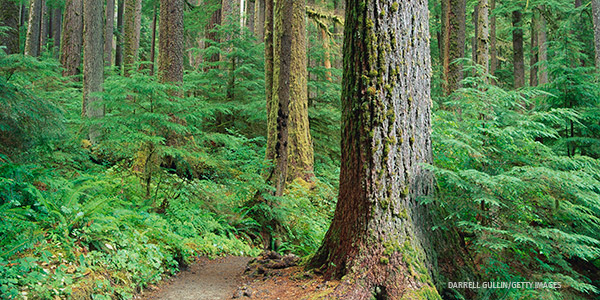 Douglas fir, which has sometimes been called the Douglas tree, Oregon pine, and Douglas spruce, is not actually a true fir, a pine, or a spruce. Indicative of the taxonomic confusion about this tree, the scientific genus name Pseudotsuga means “false hemlock,” alluding to yet another kind of tree somewhat similar to this unique but important tree. Douglas firs are evergreen trees, meaning they keep their needle-like leaves year-round. There are two varieties of this species, coast Douglas fir and Rocky Mountain Douglas fir, which are differentiated by their habitats, growth rates, and physical characteristics.

When Douglas firs grow in dense forests, they self-prune their lower branches so the conical crown starts many stories above the ground. Trees growing in open habitats, especially younger trees, have branches much closer to the ground. Coast Douglas firs are the faster-growing and larger of the two varieties, and they commonly grow up to 250 feet (76 meters) in old-growth forests and can reach five to six feet (1.5 to 1.8 meters) in diameter. Rocky Mountain Douglas firs measure about the same in diameter but only grow up to 160 feet (49 meters).

The two Douglas fir varieties grow in very different habitats, as evidenced by their names. Rocky Mountain Douglas firs are the inland variety that grow in the mountainous Pacific Northwest and in the Rocky Mountains. They are much more tolerant of cold than the coast Douglas fir, which is suited to moist, mild climates on the west coast.

Douglas firs are conifers, which means they produce seeds in cones rather than in flowers. The seeds have a single wing and are dispersed by wind. Douglas fir seeds provide food for a number of small mammals, including chipmunks, mice, shrews, and red squirrels. Bears eat the sap of these trees. Many songbirds eat the seeds right out of the cone, and raptors, like northern spotted owls, rely on old-growth forests of Douglas firs for cover. One species that relies on Douglas firs almost exclusively is the red tree vole. These tiny rodents seek cover in nests constructed in the crowns of Douglas firs and eat the needles. Red tree voles even obtain water from the tree by licking moisture off the needles. The largest coast Douglas firs commonly live to be at least 500 years and sometimes exceed 1,000 years. Rocky Mountain Douglas firs have a shorter lifespan, usually living no more than 400 years.

The population of these trees is stable. Many people are familiar with Douglas firs because they are one of several species used as Christmas trees. Aside from their use as holiday decorations, Douglas firs are one of the most valuable timber resources in the country. They’re used for furniture, poles, fences, and flooring, among other things. Although they are harvested extensively for timber, Douglas firs are widespread and aren’t in danger of extinction. However, when the trees are cut down, rare wildlife species like northern spotted owls lose valuable habitat. If stressed, the trees are also susceptible to needle disease and insect problems.