Time's Up for Line 5 from NWF Great Lakes on Vimeo.

What is Line 5 and how is it a threat to our Great Lakes? Watch our new video, "Time's Up for Line 5" featuring the music of Grammy Award-winning musician Billy Strings.

The Straits of Mackinac in northern Michigan is a unique area of the Great Lakes, a four-mile-wide channel that funnels colossal amounts of water between Lakes Michigan and Huron - often called the heart of the largest freshwater resource in the world. Below the water’s surface, lie two Enbridge owned pipelines - part of Line 5 -  that were constructed in 1953. If either of those pipelines leaked, the resulting oil slick would likely devastate some of the lakes’ most bountiful fisheries (which are at the center of tribal treaty rights), wildlife refuges, municipal drinking water supplies and one of the region’s most popular tourist attractions: Mackinac Island.

In 2010, the National Wildlife Federation witnessed the first-hand devastation that a rupture from Enbridge’s pipelines can cause. Line 6b spilled over a million gallons of tar sands oil into the Kalamazoo River system. That devastation, and Enbridge's behavior during the disaster, exposed the hidden risk of Line 5 and we began our work to protect the Great Lakes from another oil spill. After 10 years of leadership on this issue we know without a doubt that Line 5 can no longer operate in this location—the risk is unjustifiable. 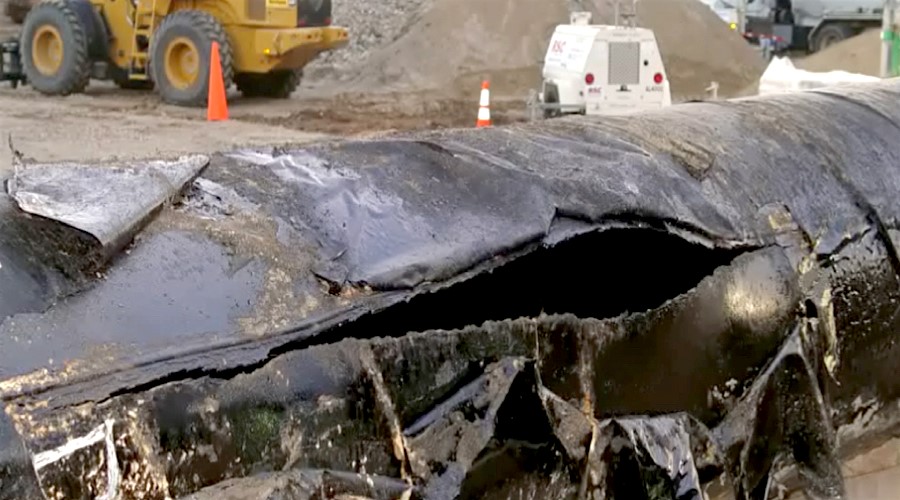 About the Line 5 Pipeline:

Line 5 runs 645 miles from Superior, Wisconsin to Sarnia, Ontario, taking a short cut through the Great Lakes at the Straits of Mackinac. The pipeline was constructed in 1953 with a payment by Enbridge Energy of $2,450 to the state of Michigan for an easement in the Straits - the terms of that easement, and the sovereign right for the state of Michigan to manage our land and water, provide clear authority for Michigan to ensure the Great Lakes are protected. Line 5 carries petroleum products largely from tar sand deposits in Western Canada through Wisconsin and Michigan to a refinery in Sarnia, Ontario, where most of the product continues on to refineries and export from Montreal. The original lifespan of this pipeline was 50 years—it is now 18 years beyond its expected term of service. 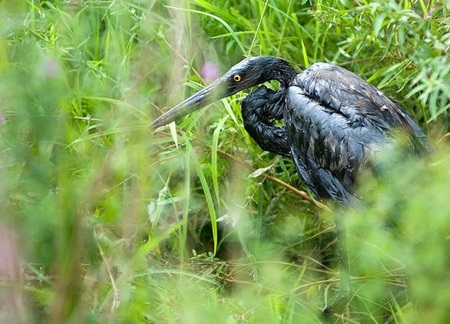 Why Line 5 Needs to be Removed from the Great Lakes:

Line 5 has a long history of unleashing environmental damage. In the last 50 years, the pipeline has had at least 33 spills, releasing a total of 1.3 million gallons of product into the environment.

Line 5 is a ticking time bomb in our Great Lakes that is threatening to spill millions of gallons of oil into the largest freshwater lakes in the world, essential habitat for wildlife, and the foundation of local economies.

A University of Michigan study concluded that this is the worst possible location for an oil pipeline in the Great Lakes. The unpredictable currents, that can be ten times the strength of Niagara Falls – and change directions every few days – make oil recovery nearly impossible 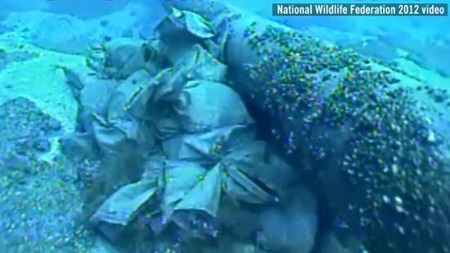 What is Being Done:

On November 13, 2020 Michigan Governor Gretchen Whitmer terminated the easement for Line 5 through the Straits of Mackinac because Enbridge Energy’s Line 5 risks our public trust waters and because Enbridge has failed to meet the terms of the easement, including operating the pipeline with due care. To learn more read the press release on this issue. 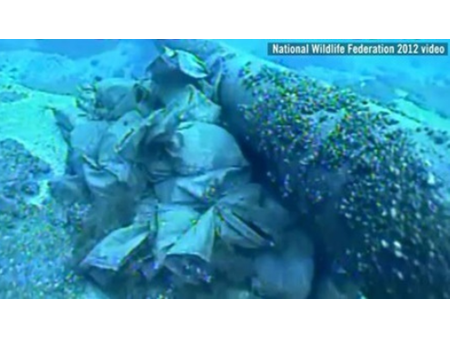 A majority of the Canadian product on Line 5 is delivered to Canadian markets. Since the 1990’s, Line 5 started delivering a small amount of natural gas liquids to the Upper Peninsula of Michigan for propane (less than 1% of the product on Line 5). The small quantities are easily offset by other sources and Governor Gretchen Whitmer has put in place a roadmap for the removal of Line 5.

NWF and the Great Lakes Business Network also released a series of independent assessments that outline alternatives to Line 5. London Economics International concluded that "the cost increase from using alternatives to Enbridge Line 5 would be lost in the noise of typical crude oil price volatility".

Want to Learn More? Check out these videos.

Great Lakes Now: Beneath the Surface

Northern Michigan Business Owners Say Line 5 Not Worth the Risk

Video: The Dirty Secret at the Bottom of the Great Lakes (Motherboard)

Enbridge’s Line 5 carries up to 23 million gallons of oil and natural gas liquids through the Straits of Mackinac each day. A large oil spill would have a devastating impact on shoreline habitat, endangered species like the Great Lakes population of piping plovers, and the Great Lakes tourism and outdoor recreation economy. 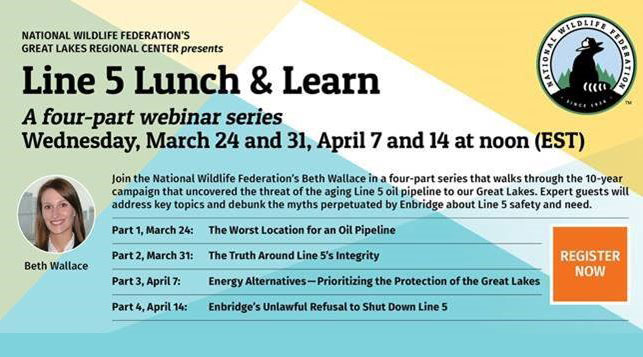 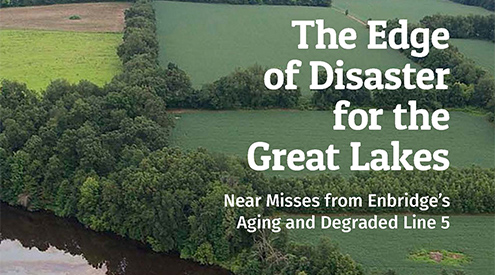 Report: The Edge of Disaster for the Great Lakes

Near Misses from Enbridge's Aging and Degraded Line 5 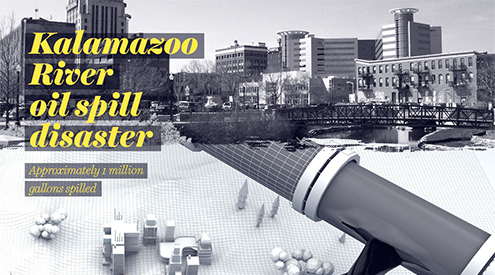 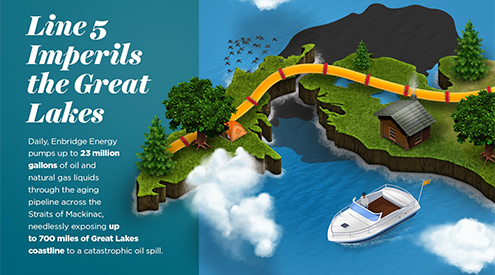 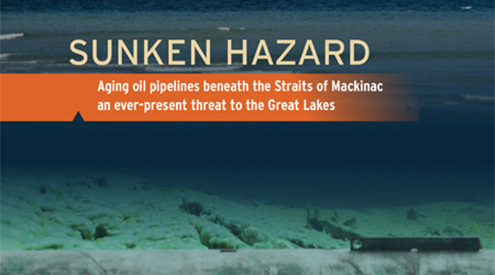 Closing the Door on Invasive Species

Chemicals of Emerging Concern in the Great Lakes: The Imperative for Additional Action