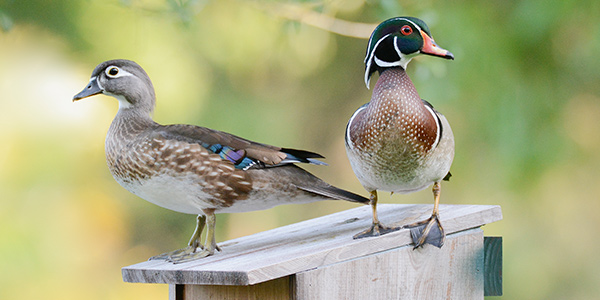 The male wood duck is one of the most recognizable birds in the United States. The markings of the male wood duck include red eyes and a red bill with a yellow patch at the base. The top of the bird's head and crest are a metallic purplish-green. The sides of the face are black, and a white stripe runs along the neck. A small white stripe also extends up each cheek. The chest and the rump are dark red, and the sides are a drab yellow with black and white stripes at the edges. The wood duck's belly is white, its tail and back are black, and its wings are black and blue.

The males do not have the decorative markings all year-round. They use the colorful markings to attract females during the breeding season, which runs from autumn until the early summer. In the late summer, they grow gray feathers with blue markings on the wings and white markings on the face and neck. You can still recognize the bird as a wood duck by its red eyes and bill.

Female wood ducks have grayish-brown bodies. The back is dark gray to brown and the sides are a lighter shade. The most noticeable characteristics of the females are found on the head. The head is gray with a white ring around each eye. The head also has a crest of feathers at the back and white feathers on the throat and chin. Wood ducks are about 19 inches (48 centimeters) in length and have a wingspan of about 28 to 39 inches (71 to 99 centimeters).

Wood ducks live year-round in the Southeast and along the Pacific coast. The highest population is along the Gulf Coast and the Atlantic coast south of New Jersey. In the summer months, many wood ducks migrate north to cooler climates. In the summer, wood ducks can be seen in every state east of the Rocky Mountains and throughout the Pacific Northwest. Wood ducks can be found in ponds, lakes, marshes, and along rivers and streams. They prefer areas that have a mix of water habitats and forests.

Wood ducks alter their diet throughout their lives. As juveniles, they eat a lot of invertebrates and occasionally a small fish. As they near maturity, wood ducks switch to a diet more focused on plants. They eat seeds, nuts, and plant matter. Wood ducks will also eat aquatic and land invertebrates.

Wood ducks pair up in late winter and begin breeding in early spring. The males attract females with their call and attractive, colorful breeding plumage.

After the pair breed, they build a nest in the cavity of a tree. The cavity can be natural or a hole abandoned by a woodpecker. They prefer trees that hang over water or are close to a water source. Trees with cavities are becoming rarer and rarer with wetland loss and competition from other species. If they cannot find a tree cavity, wood ducks will readily use nest boxes built by people. (Learn how to build a duck nest box and the best location for setting it up.)

The nest may have approximately 15 eggs lined with feathers from the female. Sometimes there will be as few as six eggs in the nest and, on occasion, as many as 40. If a female cannot find a nest of her own, then she will lay her eggs inside another wood duck's nest. A single nest can hold more than 40 eggs if some of the eggs are laid by other females.

After a few weeks, the eggs hatch. The ducklings are born with feathers and leave the nest quickly. The ducklings will not be raised in the nest, but on the water instead. This means very young ducklings must jump out of the high tree cavities onto the ground to make their way to water. Wood ducks typically do not live past the age of four in the wild. They have a high mortality rate, especially when young. Wood ducks in captivity have the potential to live well into their teens.

Wood ducks are not listed as threatened or endangered. Their population declined in the late 19th century, but has increased in recent decades. Wood ducks still face threats in the wild, including wetland loss, habitat loss, and deforestation.

Male wood ducks call to females with a squeaky whistle of "jweep." The females call with a different, louder "oo-eek" whistle.