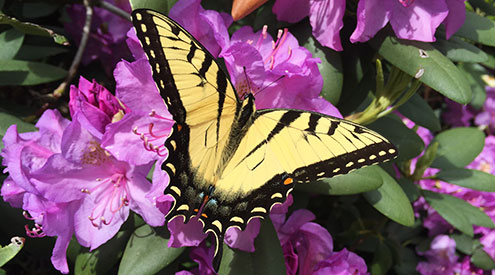 Reston, VA – The National Wildlife Federation is honoring the nation’s most wildlife-friendly cities as part of its 81st annual National Wildlife Week and Cincinnati, OH earned the number six spot on the list.

With more than 115,000 acres of protected green space and a variety of native habitats, Greater Cincinnati is home to an abundance of wildlife. According to Bill Hopple, Executive Director of Cincinnati Nature Center, “It is vital for people of our region to support wildlife by providing healthy and diverse native habitats, for the benefit of people as well as the wildlife.  Since 2014, Cincinnati Nature Center’s Plant NATIVE! initiative has been helping to create awareness of this issue and continues to protect and increase native habitat.”

The City of Cincinnati is a newcomer to the list and has stampeded into the number six spot with their 587 Certified Wildlife Habitats, including seven Schoolyard Habitats. The Green Cincinnati Plan includes a goal to increase participation in outdoors recreation and nature awareness by 20%. Cincinnati is also home to the Cincinnati Nature Center as well as the Cincinnati Zoo & Botanical Garden. Both places play a key role in biodiversity conservation by educating the community on ways to preserve wildlife.