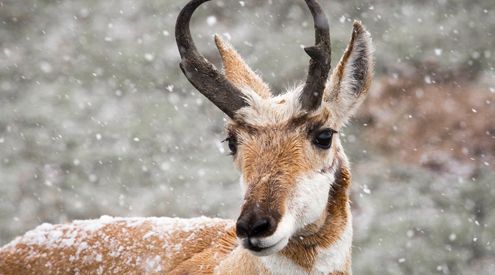 “The Recovering America’s Wildlife Act is the most significant piece of wildlife legislation since the Endangered Species Act passed in 1973.”

WASHINGTON, D.C. — The Recovering America’s Wildlife Act was passed out of the House Natural Resources Committee today, priming it for a vote on the House floor. The bipartisan legislation, which has nearly 160 co-sponsors, would fund proactive conservation efforts to prevent species from becoming endangered and would provide additional funding for species that are already listed.

“Right now more than one-third of all wildlife species in the United States are at heightened risk of extinction — and demand immediate conservation attention. The Recovering America’s Wildlife Act is the most significant piece of wildlife legislation since the Endangered Species Act passed in 1973,” said Collin O’Mara, president and CEO of the National Wildlife Federation. “Thanks to the leadership of Chairman Grijalva and Reps. Dingell, Fortenberry and Huffman, and the bill’s more than 150 bipartisan cosponsors, this historic bill is making important progress in the House and is showing that even in these divided times, wildlife conservation can bring all Americans together.”

About the Recovering America’s Wildlife Act:
• The bill will provide $1.397 billion in dedicated annual funding for proactive, on-the-ground wildlife conservation efforts in every state and territory.

• The bill will fund additional recovery efforts for the approximately 1,600 U.S. species already listed as threatened or endangered under the Endangered Species Act.

• The majority of the money — $1.3 billion — will go to wildlife recovery efforts led by state wildlife agencies. This spending will be guided by the Congressionally mandated State Wildlife Action Plans, which identify 12,000 species of concern nationwide.

• Tribal Nations would receive $97.5 million annually to fund proactive wildlife conservation efforts on tens of millions of acres of land.