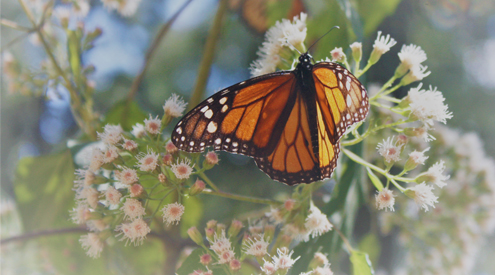 WASHINGTON, D.C. — The latest 2020 eastern monarch overwintering population numbers present a grim reality: monarch populations are still sharply declining. The critically low numbers are proof that in order to save this unique and once common butterfly, we need federal and private investment including habitat restoration, better management of insecticide and herbicide use, research toward conservation strategies and passage of bills like the Recovering America’s Wildlife Act, which can protect and conserve the ecosystems that many species rely on.

“The monarch butterfly is on the same pathway toward extinction as the passenger pigeon, a massively abundant species that disappeared in the early 1900s due to human actions and neglect,” said Dr. Bruce Stein, chief scientist at the National Wildlife Federation. “More than a century later, there is no excuse for allowing this to happen again.”

“To save the monarch — and ensure that our children and grandchildren can witness this butterfly’s extraordinary long-distance migration — we need to scale up the public and private investments needed to protect and restore their native habitat, including breeding grounds and migratory corridors,” said Dr. Rebeca Quiñonez-Piñón, monarch outreach coordinator at the National Wildlife Federation.

Native habitat restoration is crucial to the recovery of the monarch. The National Wildlife Federation works with local partners to install pollinator habitats along roadsides and to restore climate-resilient native habitats that serve as ecological stepping-stones for monarch migration in eastern urban areas.

The National Wildlife Federation focuses on building programs and outreach to protect monarch butterflies, including promoting and helping restore the breeding native habitats of the butterfly with programs like the Mayors’ Monarch Pledge and Garden for Wildlife. The organization also catalyzed and supports the Mid-America Monarch Conservation Strategy, a 16-state conservation strategy bringing together state, federal, private, and non-governmental partners to design and implement voluntary conservation activities that will benefit monarch populations.

Anyone can help the eastern monarch butterfly by: