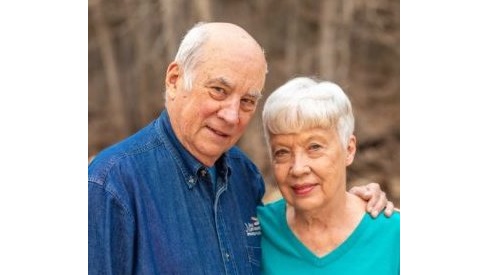 RESTON, Va. — The National Wildlife Federation honored Bob and Barb Kipfer with its National Conservation Special Achievement Award. The award recognizes the multitude of ways the Kipfers have offered their time and resources for education, community engagement, land restoration and wildlife conservation.

The Kipfers own 400 acres of land in Christian County, Missouri which they have used for hosting forestry conferences, providing charity firewood, helping with bird counting and planting seedlings in riparian corridors. The Missouri Department of Conservation has tracked black bears and trapped wild hogs on their land while Missouri State University studies stream ecology and woodland management.  They write a conservation blog and teach weekly conservation sessions at the Springfield Public Schools 5th grade Wonders of the Ozarks Learning Facility.

“The success of the conservation movement depends on responsible land ownership and the Kipfers are a shining example of how to embrace the ideals of conservation,” said Collin O’Mara, president and CEO of the National Wildlife Federation. “Their commitment to best practices and openness to community groups, conservation organizations and research institutions has turned their land into an invaluable resource for people and wildlife, alike.”

“We are honored to receive this award and want to thank the Missouri Department of Conservation and all the other organizations whose resources and support of us have made it possible,” said Bob Kipfer. “To become passionate about the natural world you first need to learn enough to love it, and you are never too old to learn.”

The Kipfers have previously been recognized as State Tree Farmers of the Year and as the Missouri Conservation Federation’s Conservationists of the Year. Going forward, the Kipfers have a 50-year protected agreement with Missouri State University where their land will continue to sustain the natural ecology and be used for continued education after they are no longer able to manage it.

The National Conservation Special Achievement Award recognizes individuals for exceptional contributions to the cause of conservation through their time, talents, and service to support the efforts of the Federation. The Kipfers were honored during the National Wildlife Federation’s annual meeting, which was held for the third time as a virtual event this year.