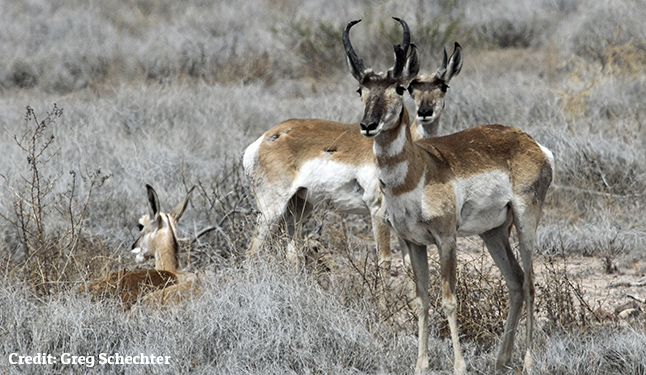 DENVER  – A landmark report released by the U.S. Geological Survey and other federal agencies highlights new mapping tools to identify and help restore the rapidly receding sagebrush habitat.  The report, “A Sagebrush Conservation Design Framework to Proactively Restore America’s Sagebrush Biome,” highlights how the ecosystem is losing 1.3 million acres every year and outlines a strategy to protect intact habitats and then grow them by working outward to more degraded areas.

“Sagebrush country now occupies less than half of its historic range and half of the remaining landscape is considered degraded. Rural communities across the West depend on the sagebrush ecosystem for ranching, hunting and other recreation, so when the landscape is at risk so too are those rural economies,” said David Willms, senior director of Western wildlife and conservation at the National Wildlife Federation. “This new report will be an invaluable tool for federal, state and local land managers, elected officials, community leaders, and conservationists to determine the best way to reduce rangeland fires, control cheatgrass and other invasive species, improve watershed health and generally restore these sagebrush lands that are vital to the survival of more than 350 species of plants and wildlife of conservation concern.”

“These new findings make crystal clear how serious the situation is - how much we, humans and wildlife, will lose if we fail to act,” said Sara Brodnax, director of public lands policy at the National Audubon Society. “But the report also provides a way forward. The researchers have developed a powerful tool for our collective toolbox, where leveraged with on-the-ground commitments, we can make a real difference for all those that depend on a healthy sagebrush country.”

“There has been a huge investment in the conservation of sagebrush country over the last two decades in terms of on-the-ground work, partnership development, and scientific research,” said Matt Cahill, director of the Sagebrush Sea Initiative at The Nature Conservancy. “We know that we can’t slow down on any of those efforts and this framework shows the top tier sagebrush habitats where we need to invest our best resources right now. This is the Defend the Core, Grow the Core concept.”

“Given the pressures on this landscape resulting from climate change and unexpected events like large wildfires, this approach will allow managers to be more effective in their responses,” said Zack Wurtzeback, corridors and crossings program director at the Center for Large Landscape Conservation. “It’s important to note that this tool is also meant to be integrated with other datasets and tailored to meet specific needs at state and local levels, which needs to happen for any of this to work.”

“The loss and degradation of sagebrush habitat is something hunters have been witnessing for far too long, and we're committed to implementing solutions with our partners to restore these critical landscapes and address impacts that we’re seeing to a wide range of wildlife species.” said John Gale, conservation director for Backcountry Hunters & Anglers. “We can – and must – do more, and this analysis and mapping data gives us a way to apply limited resources to the places that need them the most.”

The Sagebrush Conservation Design Framework is an adaptive product that will be updated annually, providing managers, conservationists, and landowners with the most current information. This allows them to effectively respond to the biggest threats to sagebrush ecosystems like climate change and fire.

Sagebrush was once the most widespread vegetation type in western North America, spanning one third of the continental United States. Today it is one of the most imperiled. The Sagebrush Conservation Design shows that over two decades large amounts of healthy sagebrush has been degraded and is no longer functional. Scientists aim to use the Sagebrush Conservation Design as a conversation starter between various partners working within the sagebrush ecosystem, utilizing its findings to set and meet shared goals for sagebrush habitat conservation. Many of these conversations are already underway, especially with the upcoming release of the Western Association of Fish and Wildlife Agencies Sagebrush Conservation Strategy, Part II. This will provide methods for how state, federal and tribal agencies, NGO, industry, and private landowners collectively can conserve the sagebrush biome.

The Sagebrush Conservation Design was initiated and coordinated by the Western Association of Fish and Wildlife Agencies and brought together 21 leading scientists in the sagebrush biome representing 12 different federal and state agencies, universities, and non-governmental organizations