The Earth Conservation Corps helps young people facing tough odds by engaging them in work to reclaim a polluted watershed in Washington, D.C. 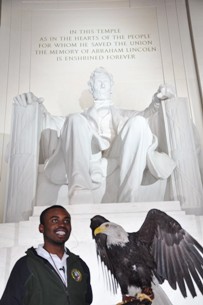 WHEN ROBERT WEST took center stage at the inaugural concert at the Lincoln Memorial in January, he uttered no words. But when the Washington, D.C., native hoisted a bald eagle in his care for the crowd on the National Mall to see, the smile on his face spoke volumes of his passion--and his pride.

Before his appearance in the spotlight, the wildlife program coordinator from the American Eagle Foundation had told the Obamas about his previous work with the Earth Conservation Corps (ECC): "I found my love for birds of prey … and I've been pursuing it ever since."

West is not the only inner-city resident in the nation's capital whose life was changed forever by ECC. The group was established in 1989 with the goal of connecting two of city's most endangered resources--the ailing Anacostia River watershed and disadvantaged young people--in the hope that both would benefit. Indeed, West credits ECC not only for turning him on to raptors but also for saving his life: "I volunteered for environmental service, and it gave me a second chance."

Corps members, ages 17 to 25, come from neighborhoods well-known for their struggles with unemployment, poverty and crime. Each participant dedicates months of service to cleaning up the environment and performing community outreach in exchange for skills training, health insurance and funds for education and living expenses. Many of the young people secure employment or pursue additional schooling after they graduate from the program. "We've had success with hundreds of Corps members," says ECC President Annette Gantt. "They've been able to contribute to society."

Last year, NWF welcomed ECC to its network of affiliates--independent organizations that work at the grassroots level to support the objectives of the Federation. "Earth Conservation Corps does an incredible job of connecting people with nature," says Tony Caligiuri, executive director of NWF's Chesapeake Mid-Atlantic Regional Center. Just as important, he adds, the group "represents the future direction of conservation work, where more of the focus will be on urban and suburban environments." The NWF alliance benefits ECC as well, says Gantt, by opening up new opportunities for programming and other types of collaboration.

In the two decades since its inception, ECC has built an impressive résumé of achievements. In the mid-1990s, for instance, Corps members reintroduced 16 bald eagles into natural areas around the Anacostia River where they had been absent for half a century. They've transformed abandoned industrial buildings into education centers, created parks and trails, and restored wildlife habitat by replacing invasive plants with native species. And each year thousands of local schoolchildren benefit from the environmental education lessons Corps members share.

While Corps members have provided roughly one million hours of service, their "main power is inspiring others," says Robert Nixon, chairman of ECC's board of directors. "They've engaged tens of thousands of volunteers in the restoration work that they do." Sometimes that work includes putting on waders and trudging through fouled waters.

Currently, an antiquated sewer system supports the Capitol and most other federal government buildings in Washington, D.C. In dry weather, it transports sanitary sewage--wastewater from toilets, sinks and the like--and anything running into storm drains to a treatment facility. But when there is rain or snowmelt of more than a half inch, the system overflows and discharges untreated waste--an annual average of two billion gallons' worth--directly into the Anacostia.

To help counter the problem, each year churches, scout troops and other community organizations help ECC remove tons of trash and other debris from the waterway. Though the Anacostia remains unhealthy, these efforts have yielded an important shift in the attitude of local residents toward the resource. "They've realized that the river belongs to them, and they're invested in what the river should be," says Nixon. "They're aware of what was taken from them due to pollution and what is threatened to be taken from them now" if proposed waterfront development initiatives aren't protective of the river.

Recent ECC graduate Ashley Howard says having people come together is the key to a brighter future. "In this community, there's a lot of violence going on." ECC addresses that challenge with love, according to Kim Olivis, a Corps alum who now works for the nonprofit. "Everybody here is part of a big family."

This support system was vital to Tendani Mpulubusi when he first came to ECC in 2003. "I was homeless, and I didn't have a job," he says. But the budding artist quickly found an outlet for his creativity: painting eco-themed murals and documenting the Corps' accomplishments as part of the group's media arts team. Such work led to outside employment, but he returned to ECC in 2008. As a program coordinator, he now helps inspire the current class of Corps members. "I'm happy to be able to give."