By following a few practical rules, homeowners who live in areas where predators range can still have safe, wildlife-friendly yards 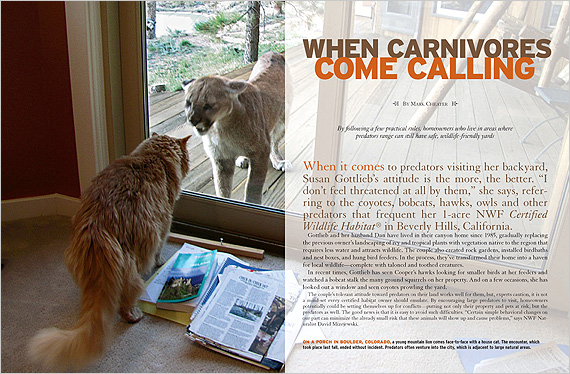 WHEN IT COMES TO PREDATORS visiting her backyard, Susan Gottlieb’s attitude is the more, the better. “I don’t feel threatened at all by them,” she says, referring to the coyotes, bobcats, hawks, owls and other predators that frequent her 1-acre NWF Certified Wildlife Habitat® in Beverly Hills, California.

Gottlieb and her husband Dan have lived in their canyon home since 1985, gradually replacing the previous owner’s landscaping of ivy and tropical plants with vegetation native to the region that requires less water and attracts wildlife. The couple also created rock gardens, installed birdbaths and nest boxes, and hung bird feeders. In the process, they’ve transformed their home into a haven for local wildlife—complete with taloned and toothed creatures.

In recent times, Gottlieb has seen Cooper’s hawks looking for smaller birds at her feeders and watched a bobcat stalk the many ground squirrels on her property. And on a few occasions, she has looked out a window and seen coyotes prowling the yard.

The couple’s tolerant attitude toward predators on their land works well for them, but, experts caution, it is not a mind-set every certified habitat owner should emulate. By encouraging large predators to visit, homeowners potentially could be setting themselves up for conflicts—putting not only their property and pets at risk, but the predators as well. The good news is that it is easy to avoid such difficulties. “Certain simple behavioral changes on our part can minimize the already small risk that these animals will show up and cause problems,” says NWF Naturalist David Mizejewski.

Consider the case of John Magee, who lives in Middleburg, Virginia, not far from the Blue Ridge Mountains and well within the expanding range of black bears. One night last spring his wife woke him up when she heard a bear outside raiding the bird feeders in their NWF certified habitat. (Bird feeders provide a rich and easily tapped source of protein and fat for bruins, and they are especially attractive to the creatures in spring when natural food sources can be scarce and in the fall when the animals are putting on fat in preparation for denning.) “We have a bedroom window that looks down on the bird feeders, and there was this huge bear. I tapped on the window, and it looked at me and wandered off into the night,” says the landscape designer.

“At first, we were both very excited and thought it was a really cool thing to look outside to see this huge black bear—it was a beautiful animal,” Magee recalls. “But bears kept coming back to our yard. One morning, my wife saw [bear] paw prints on the kitchen window. That’s when she said, ‘Hey, you’ve got to do something.’ She started emailing me photos of other people’s kitchens that had been ripped apart by black bears. So I said, ‘Okay, okay, I’ll quit feeding the birds.’”

Indeed, avoiding problems with black bears in a yard often is as simple as removing bird feeders. Magee reports that he hasn’t seen a bear on his property once since he removed his. “Taking down a bird feeder doesn’t mean a homeowner has ruined his or her certified habitat,” says Mizejewski. “Feeders should be viewed only as supplements to the natural foods a person provides for wildlife by cultivating native plants.”

“It’s always been a problem, especially in a season without a good berry crop, that bears would come down and go through feeders and garbage cans,” says Philip Arnold, the community habitat team leader for Montreat. The town council passed an ordinance a few years ago that forbids residents from putting out their garbage until the morning of pickup unless they have bear-proof containers. “It has been extremely effective,” adds Arnold. “In the last two or three years, we’ve had very few problems with bears.”

That solution, observes Mizejewski, is a good example of how people can avoid conflicts with potentially dangerous wild animals. “NWF encourages people to manage their property to benefit wildlife, but certain species don’t need our help and attracting them is not a good idea,” he says. ”It’s extremely rare that someone gets injured or killed by a wild animal. But every time it does happen, it feeds paranoia and encourages the idea that wildlife needs to be killed off where people live.”

Valerie Matheson has plenty of experience in the challenges of balancing public perceptions and wildlife protection in populated areas. She is the urban wildlife conservation coordinator for Boulder, Colorado, a city adjacent to large natural areas in the foothills of the Rocky Mountains. Both bears and mountain lions regularly venture out of these habitats and amble into the community’s neighborhoods. In the most recent period for which she has records—April 2010 to March 2011—Matheson logged 30 reports of mountain lions and 128 bear sightings in Boulder.

One problematic encounter involved a female mountain lion with two kittens that kept coming into someone’s backyard every night in 2009. The cats were attracted by a pond with running water that the owners had installed in their certified habitat—a reliable place to get a cool drink in a relatively dry part of the country. “The homeowners took a lot of pride in making their backyard as wildlife friendly as possible, and they were not discriminatory in which wildlife they attracted,” Matheson says.

The neighbors were not pleased, however, and Matheson was called in to help. “We just asked the homeowners to drain the pond and turn off the fountain in order to disrupt this pattern of the lions coming in on a regular basis, and they did that. As far as we know, it worked.”

To protect people and pets, Boulder’s policy is to discourage mountain lions and bears from coming into town. “Even though human injuries from a bear or mountain lion are rare,” Matheson says, “they do happen and the probability increases with proximity to them.” She points out that there has been only one person attacked by a mountain lion near Boulder in the past decade—a child hiking with his family on city-owned property in the mountains. (The boy’s father saved him, and the youngster recovered from his injuries.) But there have been many instances of community residents losing pets to lions. 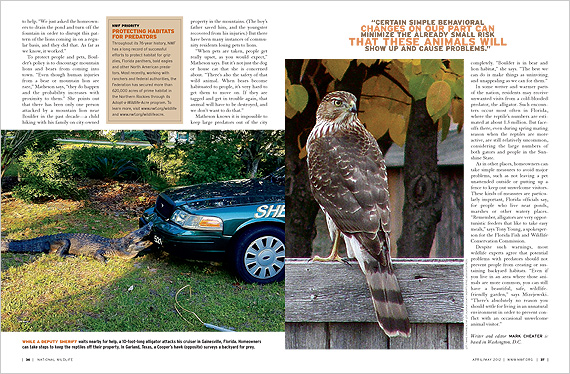 “When pets are taken, people get really upset, as you would expect,” Matheson says. But it’s not just the dog or house cat that she is concerned about. “There’s also the safety of that wild animal. When bears become habituated to people, it’s very hard to get them to move on. If they are tagged and get in trouble again, that animal will have to be destroyed, and we don’t want to do that.”

Matheson knows it is impossible to keep large predators out of the city completely. “Boulder is in bear and lion habitat,” she says. “The best we can do is make things as uninviting and unappealing as we can for them.”

In some wetter and warmer parts of the nation, residents may receive unwanted visits from a cold-blooded predator, the alligator. Such encounters occur most often in Florida, where the reptile’s numbers are estimated at about 1.3 million. But face-offs there, even during spring mating season when the reptiles are more active, are still relatively uncommon, considering the large numbers of both gators and people in the Sunshine State.

As in other places, homeowners can take simple measures to avoid major problems, such as not leaving a pet unattended outside or putting up a fence to keep out unwelcome visitors. These kinds of measures are particularly important, Florida officials say, for people who live near ponds, marshes or other watery places. “Remember, alligators are very opportunistic feeders that like to take easy meals,” says Tony Young, a spokesperson for the Florida Fish and Wildlife Conservation Commission.

Despite such warnings, most wildlife experts agree that potential problems with predators should not prevent people from creating or sustaining backyard habitats. “Even if you live in an area where those animals are more common, you can still have a beautiful, safe, wildlife-friendly garden,” says Mizejewski. “There’s absolutely no reason you should settle for living in an unnatural environment in order to prevent conflict with an occasional unwelcome animal visitor.”

How To Avoid Trouble

If you live in or near predator habitat, don’t intentionally feed these wild animals. You’re not only inviting trouble for yourself, you’re also potentially harming the predators by habituating them to humans and providing them with an unnatural diet. Consider the following common-sense steps:

• Don’t put meat and other strong-smelling food scraps in an outdoor compost pile.

• Don’t put bird feeders outside when bears are active (mid-March through mid-November).

• Don’t plant berry-producing shrubs or fruit-bearing trees too close to your house.

Throughout its 76-year history, NWF has a long record of successful efforts to protect habitat for grizzlies, Florida panthers, bald eagles and other North American predators. Most recently, working with ranchers and federal authorities, the Federation has secured more than 620,000 acres of prime habitat in the Northern Rockies through its Adopt-a-Wildlife-Acre program.

Writer and editor Mark Cheater is based in Washington, D.C.