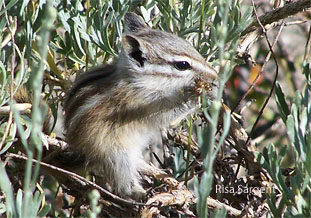 Published recently in the journal Nature Climate Change, the study by researchers at the University of California, Berkeley is one of the first to show recent, human-caused global warming as an underlying cause for a change in genetic diversity. What's more, the genetic erosion occurred in the relatively short span of a few decades, highlighting the rapid threat that changing climate can pose.

The Role of Global Warming

"Climate change is implicated as the cause of geographic shifts observed among birds, small mammals and plants, but this new work shows that, particularly for mountain species like the alpine chipmunk, such shifts can result in increasingly fragmented and genetically impoverished populations," says the study’s lead author, Emily Rubidge, who conducted the research while a Ph.D. student at UC Berkeley's Department of Environmental Science, Policy and Management. Low genetic diversity can render a species more vulnerable to the effects of inbreeding, disease and other problems that threaten species survival. "Under continued warming, the alpine chipmunk could be on the trajectory toward becoming threatened or even extinct," Rubidge says.

Historical data used in the study indicate that many small mammals in Yosemite have moved or retracted their ranges to higher, cooler elevations during the past century, a period in which the average minimum monthly temperature in the park increased by about 5.4 degrees F. The alpine chipmunk is particularly sensitive to temperature change, because it is a high-elevation species found only in California's Sierra Nevada. Historically, the animal lived at elevations of 7,800 to 12,800 feet, though rarely below 8,200. Comparing current data with information collected in the early 1900s, Rubidge and her colleagues found that the alpine chipmunk has shifted the lower extent of its range about 1,640 feet upslope—a distance roughly equal to the total length of five and a half football fields.

Laboratory analysis revealed a significant decline in the genetic diversity of the recently sampled alpine chipmunk populations compared with their historic counterparts. Moreover, the researchers found that the chipmunks showed more genetic variation among subpopulations at different sites than they did in the past, a sign of increased fragmentation in the alpine chipmunk population.  In comparison, the scientists detected no significant changes in genetic diversity among lodgepole chipmunks, a lower-elevation species that has not changed its range during the past century.

"The research led by Emily is novel and important because it shows empirically that climate change has led to the loss of genetic diversity in a wild mammal over the last several decades," says Justin Brashares, an associate professor in the Department of Environmental Science, Policy and Management.

Adapted from a University of California, Berkeley, press release by Sarah Yang.